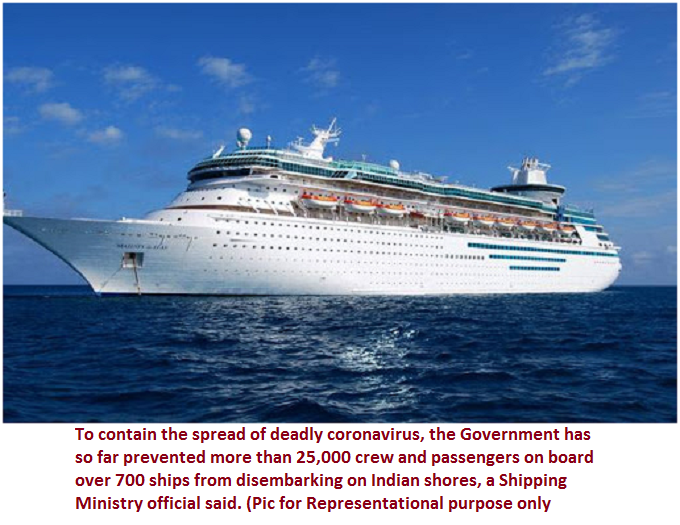 More than 25,000 crew, passengers on over 700 ships not allowed to disembark at Indian ports: Shipping Ministry official

To contain the spread of deadly coronavirus, the Government has so far prevented more than 25,000 crew and passengers on board over 700 ships from disembarking on Indian shores, a Shipping Ministry official said.

Apart from restricting cargo handling, the Government had last week prohibited entry of any international cruise ship, crew or passengers with a travel history to coronavirus-hit countries post February 1, 2020 to its Major Ports till March 31.

“Till March 13, a total of 25,504 crew and passengers on board 703 vessels arrived on Indian shores from China or travel history to impacted countries. They have not been allowed to disembark as a precautionary measure to contain any possible spread of the virus. They were allowed to anchor at designated places, but no shore passes were issued to such crew and passengers post January 26,” the official told.

As per the guidelines of WHO all passengers and crew scanned

As per the guidelines of the World Health Organization (WHO), all passengers and crew aboard the vessels are being scanned, and all necessary facilities are being extended to them, the official said.

All required protocols are being followed and help is being provided in case of fever or sickness, the official added.

International cruise ships which had intimated their call to ports by January 1, 2020 allowed

To prevent the spread of the deadly virus, the Ministry of Shipping had said it will allow only such international cruise ships which had intimated their call to ports by January 1, 2020.

“Only those international cruise ships which had planned and intimated their call to an Indian Port not later than 1st January, 2020 will be allowed to call on such port,” it said.