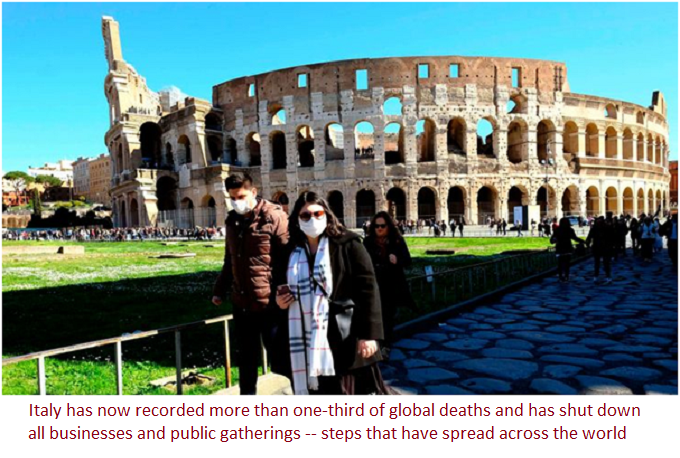 With the number of global coronavirus infections shooting past 2,00,000, governments announced new containment measures and the US Congress approved a $100 billion emergency relief package. But markets took another beating and braced for grim weeks ahead.

Trump announced the deployment of military hospital ships while, in Europe, German Chancellor Angela Merkel issued an appeal to citizens.

"Not since the Second World War has our country faced a challenge that depends so much on our collective solidarity," Merkel said in a television address.

Italy reported 475 new deaths; around the world more than 8,700 people have died

Dire news came out of Italy which reported 475 new deaths. More than 8,700 people have died around the world with fatalities in Europe now topping those in Asia, where the outbreak began in December in China.

Italy has now recorded more than one-third of global deaths and has shut down all businesses and public gatherings -- steps that have spread across the world.

French President called for further "financial solidarity" within the Eurozone

French President Emmanuel Macron on Twitter called for further "financial solidarity" within the Eurozone, after the European Central Bank announced a 750-billion-euro bond-buying scheme to contain the economic damage from the virus.

Britain, where Prime Minister Boris Johnson had initially chosen a different path, followed the lead of his European counterparts and said schools would shut nationwide from Friday.

The death toll in Britain has topped 100 and lawmakers were cautioned to steer clear of the prime minister's weekly question time, amid warnings that parliament was a particularly infectious area.