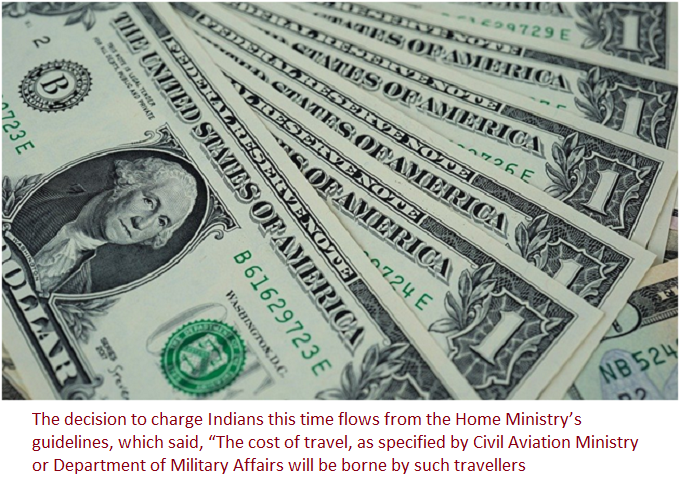 The Government will for the first time charge the stranded Indian nationals who are being evacuated by Indian Navy ships. Earlier evacuation operations by the Navy were not charged to the passengers.

The Indian High Commission in Male told the stranded Indians on that they will have to pay 40 US dollars — about Rs 3,028 — as “evacuation services charge” for repatriation by INS Jalashwa on May 8th.

In February-March 2011, during the Arab spring, when an operation to evacuate 16,400 Indians was carried out from Libya, when Indian Navy ships INS Jalashwa, INS Mysore and INS Aditya were deployed, the passage was free

The decision to charge Indians this time flows from the Home Ministry’s guidelines, which said, “The cost of travel, as specified by Civil Aviation Ministry or Department of Military Affairs will be borne by such travellers.”

While Air India is charging for the evacuation of Indians from different parts of the world, the Indian Navy or Air Force has never charged Indians for evacuating them.

According to the Navy, it has launched Operation “Samudra Setu” — meaning “Sea Bridge”, as part of a national effort to repatriate Indian citizens from overseas.

Indian Naval Ships Jalashwa and Magar will evacuate 1,000 people, keeping in mind COVID-related social distancing norms vis-a-vis the carrying capacity and medical facilities available onboard. “The evacuated personnel will be disembarked at Kochi, Kerala, and entrusted to the care of state authorities,” it said.