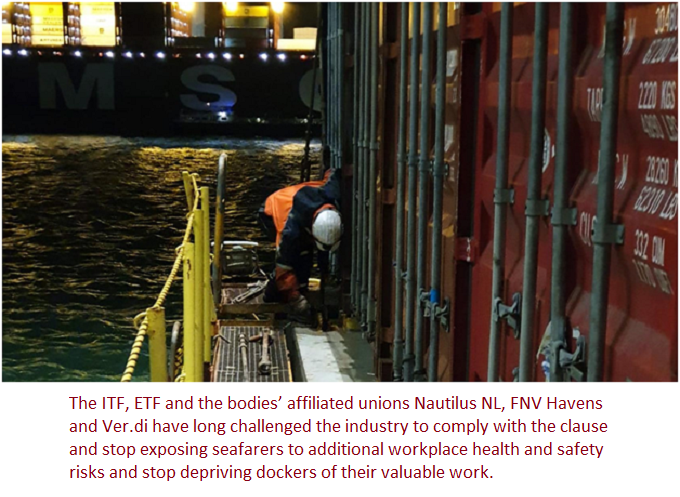 The Dutch court unfortunately refrained from immediately ordering a shipowner and manning agents to comply with the Non-Seafarers' Work Clause, also known as the Dockers' Clause.

The ITF, ETF and the bodies’ affiliated unions Nautilus NL, FNV Havens and Ver.di have long challenged the industry to comply with the clause and stop exposing seafarers to additional workplace health and safety risks and stop depriving dockers of their valuable work.

Unions urge to put an end to the dangerous practice of fatigued seafarers undertaking lashing.

Unions believe that  this cargo handling work must be undertaken by trained, experienced dockers when they are present; putting an end the dangerous practice of fatigued seafarers undertaking lashing.

Disappointingly, the judge considered that the matter was too complicated for summary proceedings.

The case is the outcome of a joint effort by the unions. The clause negotiated to finally bring in the necessary protections, came into effect on 1 January 2020, following an agreement in February 2018. The above unions joined forces to enforce this on 3 June 2020, filing preliminary relief proceedings against manning agents Marlow Navigation Netherlands B.V. and Marlow Navigation Company Limited (registered in the Netherlands and Cyprus respectively) and shipowner Expert Shipping B.V in the Netherlands. Five charterer companies later made an application to the Court to join these proceedings.

Following today’s verdict, the maritime unions will continue to fight for compliance with the Non-Seafarers’ Work Clause to see it enforced in full on all vessels with ITF collective agreements.

The maritime unions are now considering whether to instigate appeal on the preliminary decision or proceed to the pending main proceedings where the Court will extensively examine the matter.