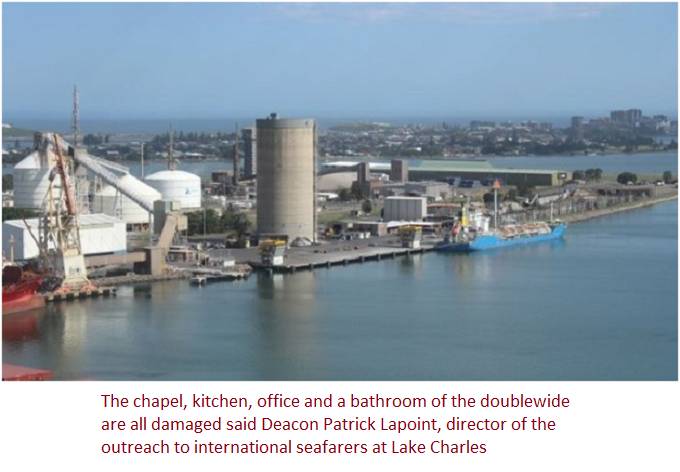 Hurricane Laura, a Category 4 hurricane, left significant damage at the Stella Maris Seafarer’s Center in Lake Charles, Louisiana, after it made landfall on the Texas-Louisiana border last Thursday 27 Aug 2020.

The chapel, kitchen, office and a bathroom of the doublewide are all damaged

“Half of our roof was lost,” said Deacon Patrick Lapoint, director of the outreach to international seafarers at Lake Charles. “We have a doublewide trailer with a building added to it in 1995 to double the size. The chapel, kitchen, office and a bathroom of the doublewide are all damaged.” Deacon Patrick showed photos of the damage on his Facebook account.

The complete doublewide will have to be removed leaving the mission with half the space. The remaining structure will have to accommodate a smaller chapel, kitchenette and bathroom, according to the center director.

The Port Arthur center cares for its international shipping community

The Port Arthur center cares for its international shipping community and commercial fishers. Secretary General of the AOS-USA, Doreen Badeaux, said shrimpers secured their vessels in a relatively safe haven and took cover prior to the hurricane. However, three shrimpers died, four were in critical condition, and two are stable as a result of the misuse of a generator in a pool hall where they were staying.

Chaplain Dana Blume at the Houston International Seafarer’s Center was affected far less. Ships that moved out of Port Houston prior to the hurricane are returning, but leaving at a much faster pace.

“I’m completely relieved and overjoyed,” said Blume. “We had no rain, no wind and no damage. I am very thankful and grateful.”

They minister to others in time of need. In general, it is a testament to their staff and dedicated volunteers

“I think the seafarer centers have once again stepped up to support not only seafarers but to minister to the local maritime community. They are not only dealing with the ongoing impact of the COVID pandemic, but now back-to-back hurricanes in the Gulf Coast," said Niels Aalund of the West Gulf Maritime Association. "The thing that impresses me is that they are working with financial hardships to make their budgets work and yet, they minister to others in time of need. In general, it is a testament to their staff and dedicated volunteers.”