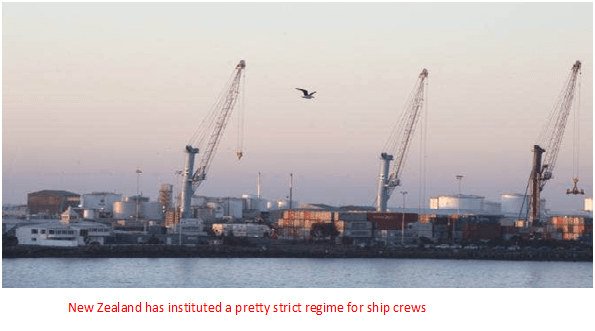 VTwo coronavirus cases have been detected at New Zealand ports in the past week, according to the Press Release, Science Media Centre.

One was a port worker who is suspected to have caught the disease while working on a ship in Auckland, and the other was a crew member on a ship docked in the Port of Tauranga who returned a weak positive test result.

The SMC asked experts to comment on pandemic port operations.

“Public health units – most of which have a port in their region – have been very focused on the maritime ports as another risk point.

“By far our greatest risk is our airports, by virtue of the fact that so many people come in through them, and they get here from other nations pretty much within 24 hours at the most. Whereas people coming in by ship have been sailing for at least few days, and most of the ships arriving here have come from places more distant – in which case they’ve been at sea for many days. Therefore most people on a ship who develop symptoms will do that before they arrive here.

New Zealand’s strict regime for ship crews; for a ship docking at its first port of call and when port workers go on the ship

“New Zealand has instituted a pretty strict regime for ship crews. When a ship docks at its first port of call, no one can get off until they satisfy the requirements for the length of stay they’ve been at sea. The only exception is if one of the crew is heading home: they have to apply for permission, then they can get immediately off the ship, go straight to an airport, and fly home. At the moment there’s essentially no shore leave, so that reduces one risk of ship crews spreading the virus.

“The other risk is when port workers go on the ship to load, resupply the galley, inspect the ship, or whatever work it might be. The requirement for those port workers is they must wear personal protective equipment – mask and gloves – when they’re on the ship. As much as possible they must prevent themselves from getting closer than 2 metres for more than 15 minutes with any of the crew. Sometimes that’s not possible and they have to get closer than that, so we can’t eliminate the risk. But now we have routine swabbing for all port workers. Also any port worker turning up to work is under clear instructions that should they have any symptoms they’re to turn around and go home.

“There have been proposals to limit the number of international ports in New Zealand. This would not be technically difficult, and it would provide some limit on the number of port workers on ships, but they might be on the ships for longer. So you win some, you lose some in that respect. There would also be another consequence in lost revenue for the closed ports and port workers left without a job to do.”