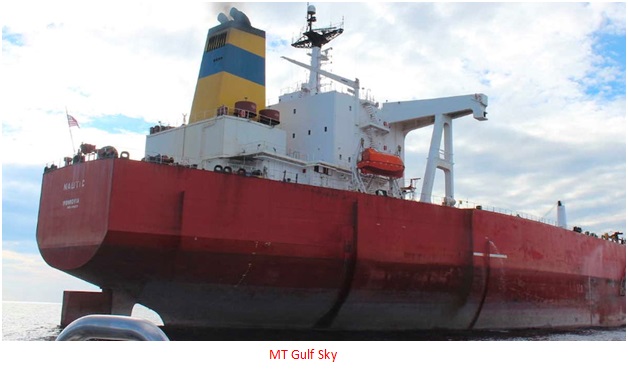 FOURTEEN weeks after their repatriation from Tehran in mid-July following the hijack of their vessel while anchored off Port Khor Fakkan Anch, United Arab Emirates, the 28 Indian seafarers of the MT Gulf Sky remain neglected, says non-profit Human Rights at Sea.

The crew’s wages remain unpaid since March 2020 totalling in excess of US$197,000, while the crew’s Continuous Discharge Certificates are still retained by UAE authorities, pending an ongoing criminal investigation by government prosecutors.

As previously reported by Human Rights at Sea and the Commonwealth of Dominica Maritime Administration, the complex commercial and geo-political case of the MT Gulf Sky continues to be under investigation at state level.

“Human Rights at Sea and the flag administration have been jointly engaged with the correspondents for the New Zealand based Maritime Mutual Insurance Association, though to date, there has been no satisfactory response in terms of finalising payment of outstanding crew wages,” HRAS said in a statement.

The Commonwealth of Dominica Maritime Administration considering a criminal complaint

The Commonwealth of Dominica Maritime Administration has submitted a final demand letter to MMIA, and is considering a criminal complaint.

“MMIA has responded and highlighted that the P&I Club is aware that the shipowners, Taif Mining Oman, had been placed under US Office of Foreign Assets sanctions after the vessel was entered with the Club,” HRAS said.

Crew employment contracts were originally entered into with the India-based company, Seven Seas Navigation India, though it remains unclear why the company have themselves not settled outstanding payments to the crew

Further, the P&I Club has been advised that the vessel managers United Islands Maritime Ventures Private Ltd, based in India, had been involved in paying wages to the crew, though this also appears now to have ceased.

Fines in excess of US$5,000,000 levied against the owners of the vessel

Fines in excess of US$5,000,000 have now been levied against the owners of the vessel and United Islands Maritime Ventures Private, respectively, by the flag administration.

“The crew continue to submit their case to all parties who will hear them, including the Director General Shipping India, maritime unions, welfare and civil-society organisations.

“To date, their collective voice has been effectively ignored,” said HRAS.

David Hammond, CEO, Human Rights at Sea said, “It is undeniably frustrating to continually fail to be able to provide the crew with any credible news relating to when their outstanding wages will be paid, and when their CDCs will be returned.

“Seafarers and their families are suffering unnecessarily.”