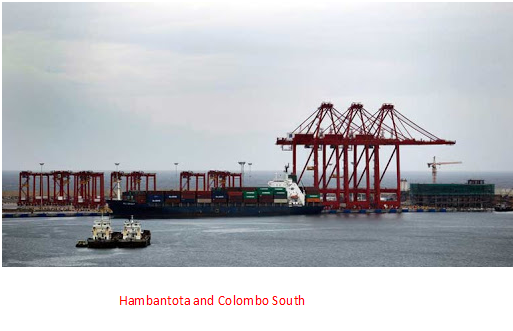 The Sri Lankan Cabinet has approved Prime Minister Mahinda Rajapakshe's proposal (holding finance portfolio) to provide tax incentives for an investment of ninety million US Dollars for expansion of Colombo south Port. The decision was taken by the Sri Lankan Cabinet on October 27 according to Sri Lankan media reports.

The initial investment for the project of five hundred million US dollars came from Colombo International container terminal. The project commenced its operations five years ago.

Sri Lankan government has not so far made up its mind to hand over the development of Colombo east terminal to India. In all likelihood the terminal which is almost ready is likely to be commissioned by the Sri LankanPort authority within a year apprehending competition from the Indian ports, Sri Lankan is ramping up its port capacity to cater to International trade. At present Colombo port survives on transhipment cargo from eastern India ports to the extent of nearly 70 per cent of the volumes

Colombo International Container Terminals has signed a 35-year Build-Operate-Transfer (BOT) agreement with Sri Lanka Ports Authority for development, construction and operation of the South Container Terminal of the Port of Colombo.

Colombo International Container Terminals Ltd. appointed AECOM as the consulting engineer, in a joint venture with China Merchants of Hong Kong and Aitken Spencer of Sri Lanka, to provide engineering consultancy services for the development, design and construction supervision of the terminal.

The works comprise the following: 1,200-meter long container quay with a minimum alongside water depth of 18-meter low water of ordinary spring tides (LWOST) including all quay furniture and installations for gantry cranes;

Over 20-meter high, 14-meter wide concrete caisson quay walls is designed to support the 1200-meter long container quay structure. Due to the size of the caisson walls, the team delivered solutions for the geotechnical challenges such as founding and settlement control.

Sri Lanka envisions being a premier shipping hub in South Asia in the 21st century. To do so, they took steps to build a new terminal with deeper berths, latest terminal equipment and increased efficiency. This will enable larger ships to dock and transfer cargo more quickly, and support Sri Lanka’s aim to become as a significant shipping hub in the region and meet the rising cargo demand.