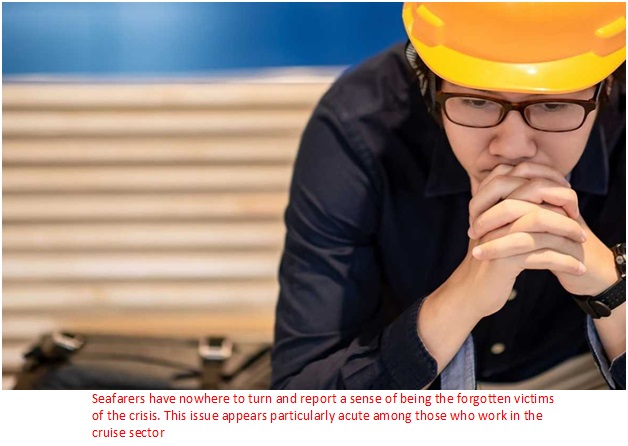 Seafarers continue to face a bleak future in the face of the Covid-19 pandemic, according to the latest Seafarers Happiness Index report, published Oct 26 2020 by The Mission to Seafarers.

The survey reports on the experiences of seafarers between July and September 2020. The average Seafarers Happiness Index for this three-month period showed an increase in happiness levels from 6.18 to 6.35, compared to the previous quarter. However, this masks significant fluctuations between July and September. Early responses from seafarers were far more positive, driven by rising hopes about the re-opening of national borders and a solution to the crew change crisis.

The index is a measure of the incompetent leadership of world governments;  “life during COVID is hell”

Unfortunately, as the quarter progressed, this optimism was lost as the second wave of infections put pay to the hopes for many of a return home or a return to work. This was reflected in a decline in happiness levels, with the comment of one seafarer that “life during COVID is hell” capturing the sentiment of many others.

A complex picture emerges in looking at relationships on board during this quarter. There are welcome reports of crew pulling together and a growing sense of unity in the face of the unprecedented challenge they face.

The survey also reports some seafarers as feeling that protective measures onboard, including wearing masks and social distancing, risk undermining social cohesion and heightening the sense of isolation.

The findings of the report make it clear that the crew change crisis has not gone away. On top of this, some seafarers report feeling trapped between the restrictions placed on their access to shore leave and fears of the exposure risks if they do go ashore.

The survey also reveals the growing impact on the welfare of seafarers who cannot join vessels and are facing severe financial consequences as a result, with careers jeopardised and livelihoods lost. These seafarers have nowhere to turn and report a sense of being the forgotten victims of the crisis. This issue appears particularly acute among those who work in the cruise sector.

The survey is sponsored by the the Shipowners’ Club and the Wallem Group.

Commenting on the latest findings, Frank Coles, CEO of Wallem, said: “. We need to start listening to our seafarers and urge governments to open their borders to seafarers and confirm their key worker status as a matter of urgency.