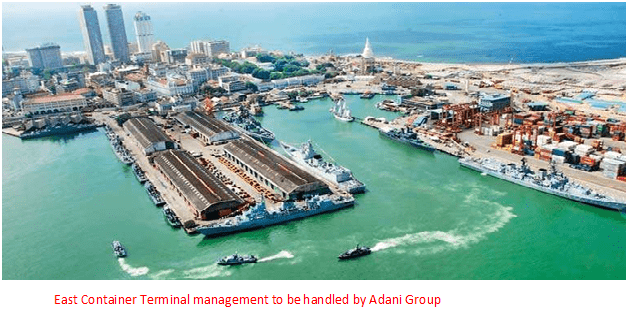 SLPA will hold 51 per cent of the stake

Sri Lanka Port Authority (SLPA) sources have indicated that authorities have conceptualized the operations of the ECT by handing over management of the terminal to the Indian government-preferred Adani Group which will have a 49 per cent stake along with its local partner – John Keells Holdings. SLPA will hold 51 per cent of the stake.

Adani Group is also building a port in Vizhingham to act in competition to the Colombo Port at the time they commenced work.

A Cabinet decision recently taken by the Sri Lankan Government had been sent down to the SLPA to commence operations at the ECT immediately and in this respect the vessel that had already been in the harbour had been brought into the terminal sans pomp and ceremony, SLPA Chairman Gen. Daya Ratnayaka was quoted as saying. He noted “We were so lucky” to have a vessel to bring in to commence operations adding that it is a huge relief in getting things started.

The Colombo Port has been getting congested lately and operationalizing the terminal will be advantageous, port sources said.