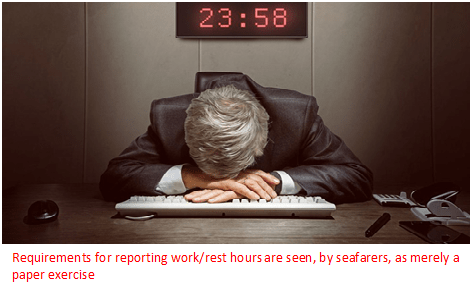 New research from a team at the World Maritime University (WMU) underlines systemic failures in the implementation of the regulatory regime for seafarers’ hours of work and rest, undermining the credibility of international regulations relating to working hours.

This is particularly concerning with the number of seafarers serving well beyond their contractual terms and having to take on additional tasks as a consequence of the COVID-19 pandemic.

Environment where adjustment instead of accuracy is the logical outcome

.Employment insecurity accompanied by financial incentives contributes to an environment where adjustment instead of accuracy is the logical outcome. For seafarers, the sole objective of recording hours is to confirm compliance and avoid disruptions to the schedule.

In such an environment, requirements for reporting work/rest hours are seen, by seafarers, as merely a paper exercise.

Deviance is normalized; incentives to accommodate are given priority

According to the report, ‘they are trapped in cognitive dissonance, where deviance is normalised.Whilst the system of regulation relies on port State control for enforcement, incentives to accommodate are given priority rather than questioning the veracity of records

Any records are susceptible to the practice of adjustment

A further concern is the fact that participants in the study, which included representatives from international and regional maritime organizations, the shipping industry and maritime unions as well as seafarers themselves, were convinced that any records are similarly susceptible to the practice of adjustment.

The conclusions of the research are shocking in their revelation of a system that looks good on paper but in fact masks an insidious unspoken collusion, which ultimately negatively impact the effectiveness of international Conventions. It seems that all stakeholders are aware of the problems but lack the authority or willingness to address the root causes.

System is flawed with respect to implementation and needs serious attention

According to Dr. Cleopatra Doumbia-Henry, President of the WMU, “This report is a wake-up call to regulators, industry and seafarers themselves. The system is flawed with respect to implementation and needs serious attention!”

The findings are devastatingly comprehensive