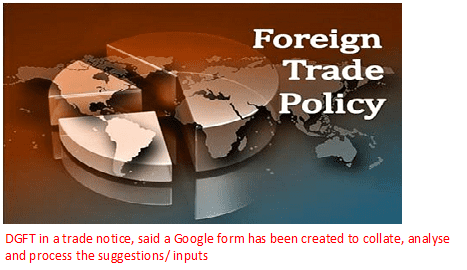 The Commerce Ministry recently sought suggestions from stakeholders, including industry and trade associations, for the formulation of next foreign trade policy (FTP). The FTP provides guidelines for enhancing exports to push economic growth and create jobs.

The Directorate General of Foreign Trade (DGFT), in a trade notice, said a Google form has been created to collate, analyse and process the suggestions/ inputs.

Stakeholders are requested to send their comments only through this form rather than e-mail or paper based submissions within 15 days from November 12, it added.

“The foreign trade policy (2015-20) was extended for a year till March 31, 2021. In order to prepare a new five year FTP, suggestions/inputs are invited from various stakeholders,” the directorate said in a trade notice to export promotion councils, commodity boards, trade/industry bodies/associations/organisations, members of trade and industry and all regional authorities of DGFT. The government announces steps to promote goods and services exports under a FTP.

At present, various benefits are provided under different schemes such as merchandise export from India scheme (MEIS), services export from India scheme (SEIS), advance authorisation and export promotion capital goods. Since 2011-12, India’s exports have been hovering at around USD 300 billion. During 2018-19, overseas shipments stood at USD 331 billion, while it aggregated USD 314.3 billion in 2019-20.