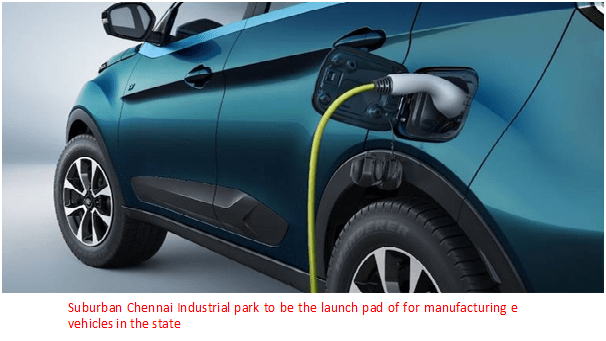 An industrial park is coming up at suburban Chennai to be the launch pad of for manufacturing e vehicles in the state. The park set up by a state government agency SIPCOT in northern part of the metropolis in Gumidipoondi taluk close to three major ports of Chennai, Ennore and Katupalli Ports.

According to sources the park set up at a cost of nearly  Rs Three hundred crores has received environmental clearance from the Ministry of Environment, forest and climate change of the government of India for the development of two villages constituting the industrial park.

About 90 per cent in the industrial park is marked for manufacturing electric vehicle components and the remaining 10 per cent of the area for synthetic and chemical industries. There have been a lot of queries from national and international companies which are keen on setting up their bases in the State.

The companies that have shown immediate and long-term interest include electric two-wheeler company Ampere, Okinawa, and swap-able battery and charging infrastructure company SUN Mobility. The official added that SIPCOT plans to set up the industrial park in the next 6 months.

“We have already prepared a masterplan. It will be executed phase-wise and we will ensure that the first phase is developed over 250 acres.

The State is planning to construct roads for movement of heavy vehicles as the village roads in the proposed park are narrow. “We are in talks with the State Highways Department for construction of road and SIPCOT will fund the construction.

State government has recently issued  a notification exempting evehicles from payment of Motor Vehicles Tax from November 3, 2020 to December 31, 2022, which, will prompt more electronic car manufacturers and battery makers to set up shop in TN.