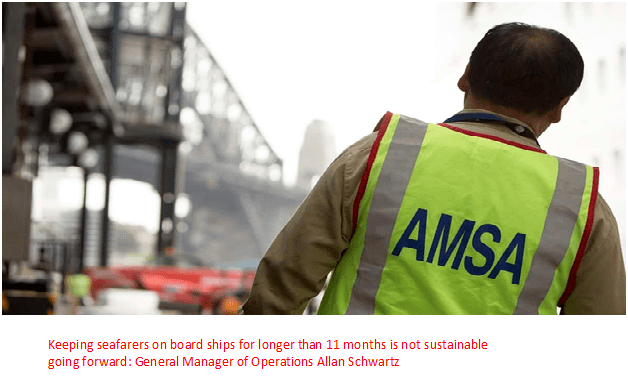 AMSA: Serving on ships beyond 11 months won’t be permitted from February 2021

Under the Maritime Labour Convention, the normal maximum period that a seafarer can serve aboard a vessel without leave is 11 months. Due to the COVID-19 travel restrictions and border closures, AMSA has allowed for interim exemptions from this rule to keep the trade moving.

“AMSA has now issued a new marine notice, Marine Notice 10/2020, stating a return to international requirements, of no more than 11 continuous months on board, will be applied from 28 February 2021,”  the authority said.

General Manager of Operations Allan Schwartz said that while flexibility on the part of regulators was necessary when the COVID-19 pandemic began, keeping seafarers on board ships for longer than 11 months is not sustainable going forward.

The decision is being announced as findings from a new report conducted by the World Maritime University (WMU) point to ‘systemic failures in the implementation of the regulatory regime for seafarers’ hours of work and rest, undermining the credibility of international regulations relating to working hours.

The analysis argues that insufficient manning is the root cause of violations, especially during peak workload conditions

“It seems that all stakeholders are aware of the problems but lack the authority or willingness to address the root causes. This report throws down the gauntlet to the states that have ratified the conventions in good faith and must now acknowledge that significant change in ensuring effective implementation of the instruments is needed to retain their credibility,” Dr. Cleopatra Doumbia-Henry, President of the WMU,  said.

Despite calls from industry bodies, including the IMO, to national governments to designate seafarers as key workers to facilitate their repatriation in line with the protocols developed by the industry, the cry for help remains unanswered.

Certain flag states like Singapore have been more proactive than others

Certain flag states like Singapore have been more proactive than others, however, shipowners have been faced with increasing costs to relieve their overworked crews as they had to divert their ships to locations where crew changes were allowed.

At the moment, the IMO is working on a list of all ports where crew changes are possible in line with crew change regulations in individual countries.