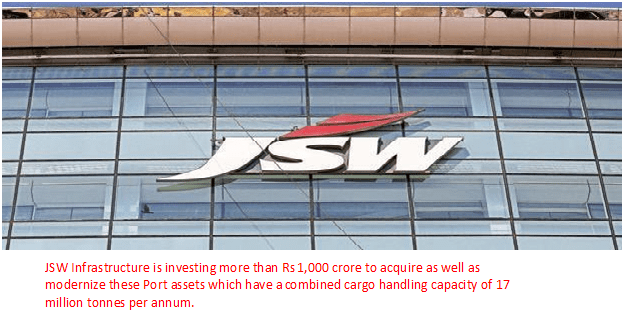 JSW Infrastructure, a leading infrastructure company and part of the USD 12 billion JSW Group, has completed the acquisition of Chettinad Group's Port Business including two terminals each in Kamarajar port Ennore and New Mangaluru port.

The acquisition allows JSW Infrastructure to own and operate of a deep draft international coal terminal and a Bulk Terminal at Kamarajar Port Limited as well as Coal and Bulk Commodity terminal at New Mangalore Port Trust (NMPT) according to a news release from the company.

JSW Infrastructure is investing more than Rs 1,000 crore to acquire as well as modernize these Port assets which have a combined cargo handling capacity of 17 million tonnes per annum.

The newly acquired Terminals will have business synergies

"These assets also fit our strategic direction to achieve 200 million tonnes per annum cargo handling capacity over next couple of years offering an opportunity to service varied requirements of a wide customer base. The newly acquired Terminals will have business synergies with our upcoming 30 MTPA coal export terminal at Paradip Port Trust which is scheduled to commence operations during the first half of calendar year 2021," Maheshwari added.

Kamarajar Port is characterized by its mixed public-private orientation. Under this model, the Port authority acts as regulatory body and as landlord, while Port operations are carried out by private companies. In FY 2019-2020, all the terminals at KPL handled 31.75 MTPA cargo and it is expected to increase its cargo traffic substantially over the next few years.

With this, three year old negotiations to take over Chettinad's assets in Kamarajar and New Mangaluru port has come to an end. JSW infra was also keen to take over the Krishnapatnam port and was engaged in intense negotiations earlier this year. but the South andhra Pradesh port was taken over by the adani group.