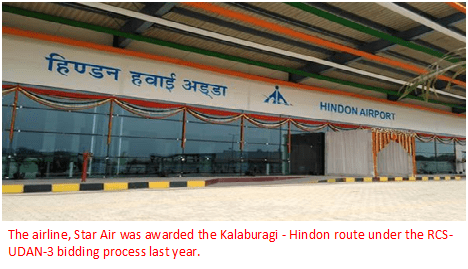 The first direct flight operations from Kalaburagi in Northern Karnataka to Hindon Airport, Ghaziabad, Uttar Pradesh( near Delhi) were flagged off under the RCS-UDAN (Regional Connectivity Scheme – Ude Desh Ka Aam Nagrik). The officials of Ministry of Civil Aviation (MoCA) and Airport Authority of India (AAI) were present at the launch.

Commencement of the flight operations on the Kalaburagi – Delhi (Hindon) route is in line with the commitment and perseverance of MoCA and AAI to enable the country with better air connectivity under the UDAN scheme. Till date, 295 routes and 53 airports including 5 heliports and 2 Water Aerodromes have been operationalized under the UDAN scheme.

The airline, Star Air was awarded the Kalaburagi - Hindon route under the RCS-UDAN-3 bidding process last year. The airline will be operating three weekly flights on the route and will deploy its 50-seater Embraer-145 luxury aircraft. It currently connects 15 routes under UDAN and with the addition of the Kalaburagi – Hindon route, there will be 16 routes under the ambit of RCS-UDAN for Star Air.

Situated at a distance of less than 30 km from New Delhi, Hindon airport belongs to the Indian Air Force (IAF) and the land was handed over to AAI for development of new civil enclave. IAF granted necessary permissions for the usage of airbase for civilian flights under UDAN scheme.

Similarly, Kalaburagi airport which is at a distance of 13.8kms from the Kalaburagi city too been operationalized under UDAN to boost the aerial connectivity of Tier-2 & Tier-3 cities of the country. Kalaburagi which is known for its culture and is a gateway for tourist destinations including Buddha Vihar, Sharana Basaveshwara Temple, Khwaja Banda Nawaz Dargah and, Gulbarga Fort is now connected with New Delhi, the capital of India with direct flights for the first time. This will act as a catalyst to boost the trade & tourism of the region.

Until now people had to travel either by road or rail

Until now, the people had to face tremendous inconvenience to cover the journey from Kalaburagi to Hindon. Due to the unavailability of direct flight operations between the two cities, people had to travel either by road or had to opt for rail travel, which took more than 25 hours to cover the distance of 1600 km.

Now, they can take a direct flight and cover this long-distance journey in just 2-hour 20 minutes. Many people travel frequently between these two cities for personal as well as professional purposes. People from Bijapur, Solapur, Bidar, Osmanabad, Latur, Yadgir, Ranga Reddy, Medak would also receive direct benefit of the flight operations on Kalaburagi – Hindon.