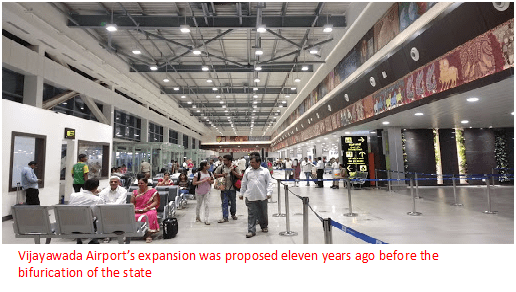 Come 2021 the expanded Vijayawada International Airport at Gannavaram can receive Boeing 747-400 and 777-300 aircrafts on par with modern international airports. The newly constructed terminal can accommodate 16 aircrafts at a time according to Airport Authority of India sources.

Flight trials on the extended runway are to be conducted in the next few days and final clearance will be received from Directorate General of Civil aviation early next year these sources were quoted by the local news papers.

The expansion of the runway was taken up nearly three years ago. The runway has been expanded from the existing 2286 meters to 3360 meters. The expansion project was completed in two year at cost of nearly rs 170 crores

The expansion of the Vijyawada International airport was proposed eleven years ago before the bifurication of the state. Land acquisition posed a serious problem for the expansion project.

In June 2019, work on the extended runway, including electrification, was completed.

The local district administration negotiated with the villagers, and in June 2019, work on the extended runway, including electrification, was completed. “We have been in touch with DGCA officials for the past months for approval for landing and take-off of flights since the work was completed.

Due to various reasons, including the lockdown, it got delayed. Following our repeated appeals, the DGCA examined various reports virtually and recently granted approval,” the sources said.