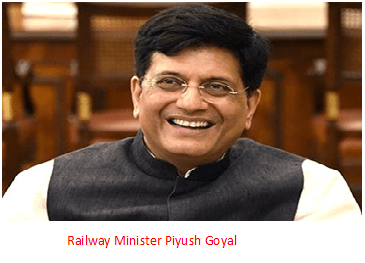 Railway Minister Piyush Goyal has called for better monitoring; time bound completion of projects and increasing operational efficiencies to ensure achievement of all the development initiatives being taken especially the capacity building in the Railway infrastructure sector.

Proper planning and due diligence before the start of  project was vital for  not only ensuring that there was  no cost escalation in the projects but also for their   comprehensive completion as well. The Minister sought suggestions and inputs from officers to further improve the performance in major areas of development in Railways like business operations and infrastructure.

Railways Minister Piyush Goyal reviewed the functioning of all  the directorates of Railway Board. Meeting was attended by Chairman & CEO Railway Board and all officers of rank Executive Directors level and above in the national capital on November 19th.

The Minister emphasised on the need to focus on the needs of ordinary travellers and  businesses whether it's the development of more amenities in the sleeper or 3A classes or making freight more customised and simple for all businesses .

During the last 8 months, Indian Railways has taken up the challenge to lead the national fight back against Corona and it's social economic consequences in an outstanding manner whether it was resurgence in freight volumes , completion of vital maintenance projects during the lock down or supporting the national health care efforts. The Minister stressed on continuation of good work being done and not letting the guard down.