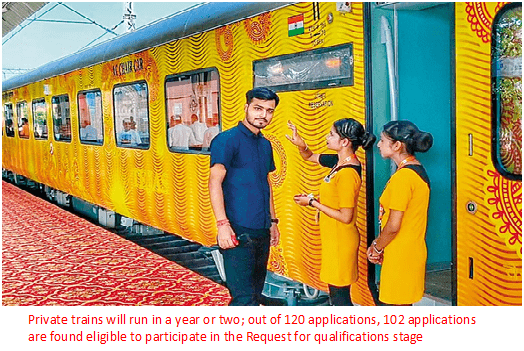 As many as 38 World Class Private Trains will run from Delhi and Mumbai divisons when the private sector operation of rail services kick starts in a year or two.

Ministry of Railways has completed the evaluation of Applications received for running of private trains. Out of 120 applications, 102 applications are found eligible to participate in the Request for qualifications stage.

Northern India has cornered  33 services including Nine each from Allahabad and Jaipur  followed by Chandigarh 8 and Patna 7.

Chennai region including Kerala will have just five services

In sharp contrast Chennai region including Kerala will have just five services followed by, Bengaluru at eight and 9 for  Secunderabad. Howrah will have eight services. The Railway owned Indian Rail Catering and Tourism coporation has applied for all presence in all the railway clusters in North India but barring Secunderabad it will have no presence in private sector participation  in Southern parts of the country.

The applications were opened on October 7.  Ministry of Railways (MOR) had invited Request for Qualifications (RFQ) for private participation in operation of passenger train services over 12 Clusters comprising for more than 150 Origin Destination pair of routes through introduction of 151 modern Trains.

This is the first major initiative of attracting private investment for running Passenger Trains over Indian Railway Network. The project would entail private sector investment of about Rs 30,000 crores.

The private entities for undertaking the project would be selected through a transparent two-stage competitive bidding process comprising of Request for Qualification (RFQ) and Request for Proposal (RFP) In all 120 Applications have been received for the 12 Clusters, from 16 applicant firms.