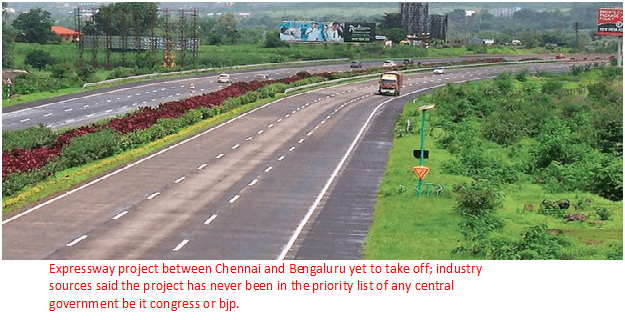 Thirty years on: Expressway project between Chennai and Bengaluru yet to take off

It is a record of sorts of how political will is lacking in successive central governments in implementing infrastructure projects south of the Vindhyas. It is almost thirty years since the then finance minister P Chidambaram announced in Parliament that an Expressway will be  constructed between Chennai and Bengaluru,but construction is yet to take off leave alone completion.

Several expressways have since been constructed in northern and western parts of the country India. But the turn for the Chennai Bengaluru Expressways has not arrived. Several announcements were made in the past about the revival of the project but they did not take off.

In sign of revival of the project put on backburner for nearly three decades, Union transport minister Nitin Gadkari has recently announced that Prime Minister Narendra Modi will lay the foundation stone for the project.

In a positive development, the National Highways Authority of India (NHAI) starts work on the landmark 263 kilometres long four-lane expressway between Bengaluru and Chennai. NHAI has invited bids for the building of a package under the Bengaluru-Chennai Expressway and the work on the same is expected to begin by February or March 2021. The entire project has been broken down into ten packages and is aimed to be completed by March 2024.

Of the ten packages, three lie in both Karnataka and Andhra Pradesh, while four packages lie in Tamil Nadu. The entire project will be executed at a cost of Rs 17,000 crore and once completed it will enable the commute between Bengaluru and Chennai to be completed in just two-and-a-half hours.

The project marks the first expressway project in South India and it shall give a big fillip to the logistics movement given both Bengaluru and Chennai are home to upcoming logistics parks.

Industry sources said the project has never been in the priority list of any central government be it congress or bjp. For all you know this could also be an announcement meant to be on paper for assembly elections are nearing in Tamil Nadu.