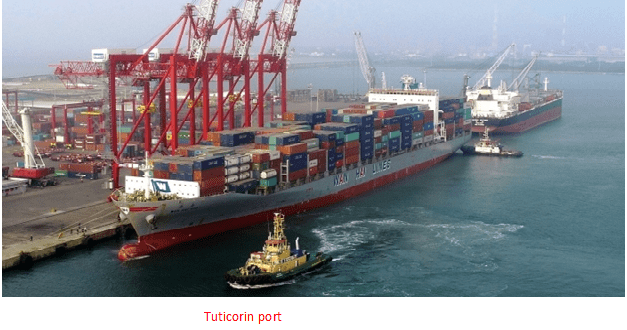 At least Seven Main line vessels especially belonging to MSCN that decided to skip Colombo port, keen to call at the nearby VOC Port, Tuticorin but turned away due to the bureaucratic delays and limitations of draft at the Port. The vessels had decided to skip the Colombo Port due to congestion caused by corona virus but had to move away to Cochin transshipment terminal since they had no option.

The Tuticorin port administration had stipulated the size of the container ships that can enter its container terminals in its recent trade notice at 310 meters length, 48 meters width and 14.2 meters draft. However, many main line vessels within the stipulated size made a request to call at Tuticorin port but they were turned away under one pretext or other according to industry sources.

The sources told Sagar Sandesh that the Marine staff are not confidant to bring the vessels since they have doubts about the draft in certain patches. They do not want to take the risk under these conditions. The port administration is also taking a long time in taking a decision on the Main line vessel's request to call at the port.

The main line vessels want a decision from the port administration within a few hours before they take a decision in the high seas whether to divert to Tuticorin or Cochin. Most of the time the decisions are delayed indefinitely forcing the main line ships to divert to Cochin.

The Rs 3000 crore outer harbor project at Tuticorin cleared by the union cabinet, and announced at the first budget of the BJP government in 2016 was scrapped without assigning any reason. The transshipment terminal project at Colachel given in principle clearance by the Union cabinet in 2016 has not taken off.

Meanwhile according to reports from Cochin the diversion of several ships due to congestion at Colombo Port and failure of Tuticorin port to accept opportunities has turned out to be a boon for Cochin Port in terms of gaining transshipment business.

Of late, the International Container Transshipment Terminal (ICTT) at Vallarpadam at Cochin Port has started receiving additional mainline ships on ad hoc basis with transshipment volumes. The rising number of Covid cases among port workers in Colombo has aggravated the existing congestion in that port, reports said.

Hundreds of port workers and customs staff in Colombo Port have been declared positive for corona virus. Besides the movement restrictions imposed by the Sri Lankan government in Colombo city following prevalence of Covid-19 have acted as obstacle to the employees from reaching the port premises. Consequently, handling of cargo at the port has suffered a setback during the last one month.