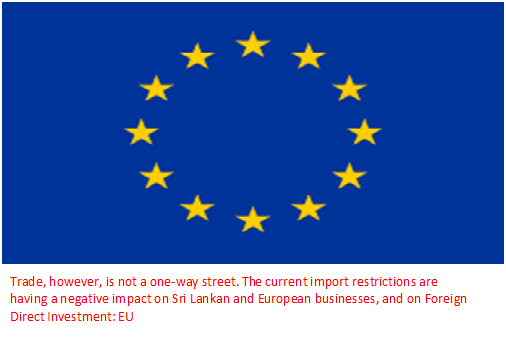 The EU mission and France, Germany, Italy, the Netherlands and Romania have urged Sri Lanka to do away with the current import ban imposed in the wake of debilitating economic crisis caused by the corona pandemic.

Prolonged import ban is not in line with WTO regulations

They have told Foreign Minister Dinesh Gunawardena that a prolonged import ban is not in line with World Trade Organisation regulations. Sri Lanka imposed restrictions to save foreign reserves as major revenue sources, such as tourism, garment trade and foreign remittances dropping sharply were affected by the pandemic.

Trade, however, is not a one-way street

“Trade, however, is not a one-way street. The current import restrictions are having a negative impact on Sri Lankan and European businesses, and on Foreign Direct Investment. Such measures impair Sri Lanka’s efforts to become a regional hub and negatively impact Sri Lankan exports by constraining the import of raw material and machinery. We recall that a prolonged import ban is not in line with World Trade Organisation regulations.

The Delegation of the European Union (EU) and the Embassies of France, Germany, Italy, Netherlands and Romania have issued the following statement: “As COVID-19 continues to bring a number of challenges, we, the Colombo-based Heads of Missions representing the European Union and its Member States, held a series of high-level meetings, including with Foreign Minister Gunawardena.

On this occasion, we underlined the EU’s longstanding support for Sri Lanka as a reliable partner, including through over 1 billion EUR of grants over the last 25 years.

EU is the second biggest export market for Sri Lanka

“In addition to our significant development cooperation, we recall that the EU is a crucial economic partner for Sri Lanka. Thanks to the EU’s special Generalised System of Preferences (GSP+), Sri Lanka enjoys competitive, predominantly duty- and quota-free access to the EU market.EU is the second biggest export market for Sri Lanka worldwide, with a positive trade balance of more than 1 billion EUR (about 220 billion LKR) in 2018 and 2019.