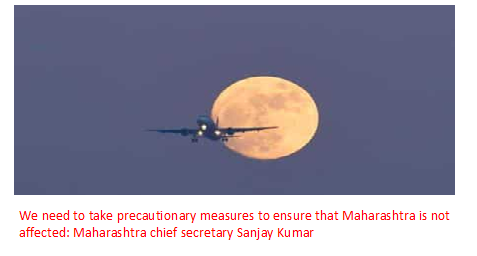 Maharashtra government is considering halting flight operations and train services between  Mumbai and  Delhi owing to a sharp rise in Covid-19 cases in the national capital. Maharashtra chief secretary Sanjay Kumar said a final decision was yet to be taken on implementing the curbs. But it remains to be see whether the central government would agree to the proposal in  the busiest air corridor of the country.

We need to take precautionary measures to ensure that Maharashtra is not affected: chief secretary

We have been reviewing the situation. In the wake of surge in Covid-19 cases in Delhi, we need to take precautionary measures to ensure that Maharashtra is not affected. There are limited trains and flights operating between Delhi and Mumbai and other cities in Maharashtra. The decision to either curtail them further or stop them entirely will be taken in due course,” said Kumar.

The issue was discussed at a high level meeting presided over by the Chief secretary to deliberating measures to ensure the infection does not spread through people entering Maharashtra from other cities and states that have high cases.

Even in May, when we had tried to push the resumption of flight services [between the two cities] by a few weeks, the Centre was firm on starting it immediately. In such a scenario, we will have to go for stricter screening of passengers at airports if we are not allowed to completely stop operations, according to sources.

“The policy will have to be uniform for the state and it cannot be only for Mumbai. The final decision is expected after a meeting with chief minister Uddhav Thackeray.”

Another official, on condition of anonymity, said trains not only originating from Delhi, but also passing through the national capital, will have to be stopped. He said it could be a tough task as it could halt travel from many other states in north India.

The railway ministry, meanwhile, clarified that no decision had been taken regarding cancellation of trains on the Mumbai-Delhi route. Railway officials, however, pointed out that the West Bengal government had restricted movement of trains from places with high coronavirus cases which the Maharashtra government can follow