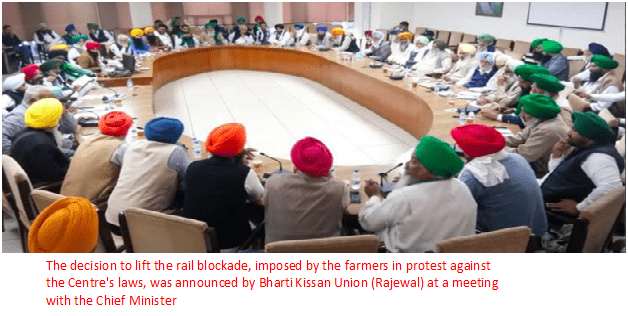 After 2 months and when the farmers union's blinked, Railways decide to resume services in the border state of Punjab

Railway Minister Piyush Goyal  said that the Indian Railways is going to commence services from and through Punjab as the farmer unions have announced complete lifting of blockades.

"After the postponement of the farmer movement on railway tracks and stations in Punjab from November 23, Indian Railways is going to start rail services from and through Punjab," Goyal tweeted.

The industry in the state has suffered a loss of around rs 40,000 crores

"Passengers, farmers, and industries will be benefited by the removal of the impasse in train operations," he added. The industry in the state has suffered a loss of around rs 40,000 crores since their products could not reach the Ports in Gujarat for exports. The containers were stranded in the state when the railways decided to suspend the services.

The development comes two days after Punjab Chief Minister Amarinder Singh succeeded in breaking the imbroglio over the suspension of train services in the state, with the farmer unions acceding to his appeal and announcing complete lifting of the rail blockade from November 23.

The decision to lift the rail blockade, imposed by the farmers in protest against the Centre's laws, was announced by Bharti Kissan Union (Rajewal) at a meeting with the Chief Minister.

The breakthrough could not be achieved since both the railway and the agitating kisans stuck to their stand. While the Kisan unions urged the railways to run the freight trains and later the passenger services the railways stuck to their stand that they will both the services together. Now the Kisan union have blinked following the intervention of the state chief minister captain Amrinder singh and suspended the agitation over the passage of the kisan law by both the houses of parliament in september this year.

India woke up on September 25 with farmers up in arms across the nation against the contentious Agri Bills passed in the Monsoon Session of Parliament.