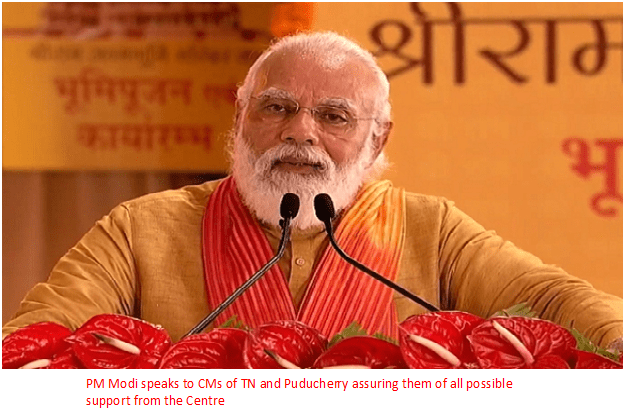 In a tweet, the Prime Minister said, "Spoke to Tamil Nadu CM Shri @EPSTamilNadu and Puducherry CM Shri @VNarayanasami regarding the situation in the wake of Cyclone Nivar. Assured all possible support from the Centre. I pray for the safety and well-being of those living in the affected areas."

Cyclone Nivar is likely to cross the North Tamil Nadu coast between Puducherry and Mahabalipuram in the North Tamil Nadu coast on November 25th afternoon. Caution signal number Seven has been hoisted at Puducherry and Cuddalore ports and signal number five in Nagapatinam Port in central Tamil Nadu. The signals are an indication that the cyclonic storm is expected to cross the coast near these ports in the next 48 hours.

Trains and buses passing through the likely path of the cyclone have been cancelled. The fishermen in north and central tamil nadu coast have been asked not to venture into the sea for the next two days