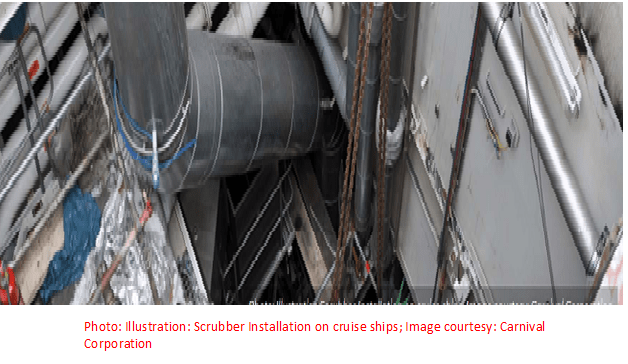 A study commissioned by the Canadian Government is recommending individual governments, including Canada, to take unilateral action to restrict or prohibit scrubber discharges from both open-loop and closed-loop systems.

The report, released by the International Council on Clean Transportation, claims that ships, particularly cruise ships, fitted with scrubbers, were basically ‘cheating the global fuel standard’.

According to the findings of the study, scrubbers, which are being used as an alternative to low-sulphur fuels to comply with IMO 2020 Sulphur Cap, are harmful to both the air and the sea.

Compliance with IMO does not guarantee that scrubber discharges are safe

Specifically, the exhaust gas cleaning systems, known as scrubbers, have been approved by the International Maritime Organization (IMO). However, even though scrubber discharges usually comply with IMO guidelines; the study indicates that compliance does not guarantee that scrubber discharges are safe.

Scrubbers lower sulfur dioxide emissions, but when compared to low-sulphur fuels like MGO other emissions were higher, specifically those of carbon dioxide, particulate matter, and black carbon, the council said.

For water pollutants,  all scrubbers (open-loop, closed-loop, and hybrid) discharge water that is more acidic and turbid than the surrounding water.

Additionally, scrubbers emit nitrates, PAHs, and heavy metals, all of which can negatively affect water quality and marine life.

Hence, the study recommended the Canadian government to issue an immediate prohibition on using scrubbers to comply with the Canadian portion of the North American ECA because they are not equivalently effective at reducing air pollution as ECA-compliant fuels. It also called for an immediate prohibition on all scrubber discharges in Canadian ports, internal waters, and territorial seas saying that they contribute to acidification and water pollution that can negatively affect marine life.

Within Canada, this includes scrubber discharges in the Great Lakes, as well as British Columbia and the St. Lawrence Estuary, where endangered species like the Southern Resident killer whales and belugas already suffer from high levels of contamination, including from PAHs and heavy metals.

“We also recommend that the IMO should consider prohibiting the use of scrubbers as a compliance option for new build ships and work to phase out scrubbers installed on existing ships…we found that using HFO with scrubbers is not equivalently effective at reducing air pollution compared to using lower sulfur fuels, such as MGO,” the study reads.

Regulations have very little to do with science or ecosystem protection

“One thing this federally-funded report makes abundantly clear is that the regulations have very little to do with science or ecosystem protection,” said Anna Barford, Canadian Shipping Campaigner, of Stand.earth environmental organization.

The environmental organization said that now is an opportune moment for the federal government to get ahead and bring in rules that protect people and vulnerable coastlines from scrubber washwater.