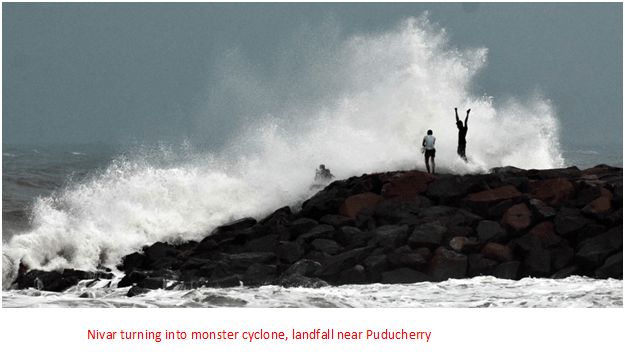 Cyclone Nivar made landfall near Puducherry, south of Chennai as a very severe cyclonic storm. The landfall that started from 11.30 pm. on November 25th night lasted till 2.30 a.m. on November 26th with the eye of the storm crossing near Marakanam 15 kilometers south of Puducherry.

No major loss of life was reported in North Tamil Nadu or Puducherry coasts so far. Cautionary signal ten was hoisted at both Cuddalore and Puducherry ports while signal number nine was on at Chennai port on November 25th.  Atleast six vessels were moved out of the chennai port which made their way to the high ways much before the cyclone hit the coast.

In the process of landfall, it dumped extremely heavy rainfall in coastal areas. Puducherry received the highest of 30 cm rains followed by  Cuddalore 27 cm and Chidambaram 13 cm. Rains lashed many places in and around Chennai too. In Chennai city,  Nungambakkam recorded 11 cm, Poonamallee and Taramani received 10 cm till 6.30 hours in November 26th.

The severe cyclonic storm Nivar now lay centered over north coastal Tamil Nadu, about 50 km northnorthwest of Puducherry. It still maintains a wind speed of 85 to 95 kmph as it moves to interior areas. It would move northwest wards and weaken further into a cyclonic storm during next three hours.

Places like Ambur, Tiruvannamalai, Vellore and Arani may experience squally winds with a speed of 50 kmph. In Chennai, rains may continue and winds will be strong for next six hours, according to the Meteorological Department. The rains can go up to Bengaluru under the impact of the cyclone

Chennai airport to remain closed for operations till 9 a.m.

The chennai airport has extended by two hours its decision to suspend flights on November 27 taking into weather conditions post cyclone Nivar. The flights will start from around 9 hours now.

The closure of #AAI #Chennaiairport due to #CycloneNivar stands extended till 0900hrs of 26.11.2020, on assessing the prevailing climatic conditions and taking passenger safety as top priority. The inconvenience caused is deeply regretted according to the official twitter handle of the Airport Authority of India Chennai Airport."

The Chennai airport had suspended domestic, international and cargo operations from 7 p.m. on November 25 th till 7 a.m. on Novemer 26th in the wake of Cyclone Nivar. The decision was taken considering the safety of the passengers AAI sources said.