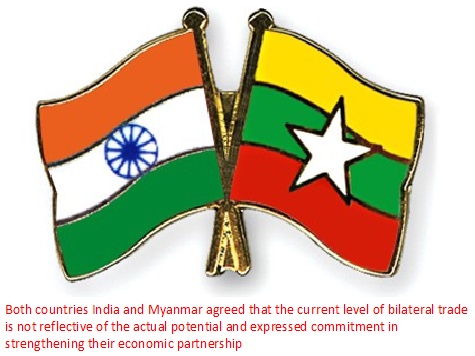 India and Myanmar have acknowledged that mutual benefit exists in collaboration and cooperation amongst oil and gas companies of both the countries especially in the field of petroleum products and refining.

Both countries agreed that the current level of bilateral trade is not reflective of the actual potential and expressed commitment in strengthening their economic partnership by facilitating enhanced sectoral collaborations and trade promotion. They also reviewed the status of connectivity projects and scaling up the infrastructure at the border for strengthening trade.  .

India has reiterated’s its  commitment in enhancing its multifaceted cooperation with Myanmar, in several areas including trade and investment, Oil & Gas, Power, Insurance, Pharmaceutical and Infrastructure and expressed satisfaction on the increased investments by India in Myanmar in these sectors

The 7th Joint Trade Committee Meeting between India and Myanmar was held through virtual mode on November 24th, according to an official release. The Meeting was co-chaired by Dr. Than Myint, Union Minister for Ministry of Commerce, Myanmar and Mr Piyush Goyal, Commerce Minister of India.

Both sides reviewed their preparedness to meet the COVID-19 challenges

During the consultations, both sides reviewed various bilateral issues ranging from trade, investment, banking, connectivity, capacity building and upgradation of border infrastructure. Both sides reviewed their preparedness to meet the COVID-19 challenges and expanding cooperation in pharma and health sector including traditional medicines.

Mr Goyal highlighted the strong cultural and commercial ties between India and Myanmar and the priority India attaches to its partnership with Myanmar in accordance with India’s ‘Neighborhood First’ and ‘Act East’ policies.

The meeting concluded with both countries expressing satisfaction over the commendable strides made in bilateral economic ties in the last few years and reiterated their commitment to further strengthening the trade and investment ties. Mr Goyal also extended an invitation to Dr. Than Myint for the next Joint Trade Committee meeting scheduled to be held in India in 2021.