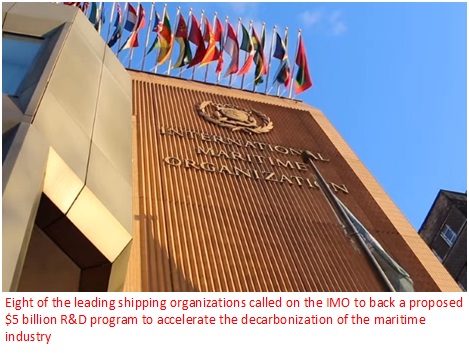 IMO to Consider Industry Call for $5B R&D Decarbonization Program

Among the decisions at last week’s International Maritime Organization’s Marine Environment Protection Committee (MEPC 75) was an agreement to give further consideration to the proposal of the major shipping organizations to launch a research and development initiative funded by the industry and administered by the IMO. The members reviewed the proposal and “agreed to give it further consideration.”

Coordinated to the launch of the MPC 75 sessions discussing the efforts to lower carbon emissions, eight of the leading shipping organizations called on the IMO to back a proposed $5 billion R&D program to accelerate the decarbonization of the maritime industry. The proposal builds on the previous $2 per tonne charge on bunker fuel sales that the International Chamber of Shipping and others have been advocating for as a means to focus the industry’s efforts.

The organizations, which collectively represent all sectors of shipping from cargo to passengers and over 90 percent of the world’s merchant fleet, said their effort was focused on R&D, but critics said the efforts did not go far enough and accused the organizations of trying to dominate the discussion which could have adverse consequences on their cost of operations.

The organizations proposed the formation of a new International Maritime Research and Development Board (IMRB), to accelerate the introduction of zero-emission technologies for maritime transport to be funded by a mandatory R&D contribution of $2 per tonne of marine fuel consumed. Say that the IMRB is a crucial vehicle for driving the progress needed to build a zero-carbon shipping industry and that the necessary funding can only be provided within the global regulatory framework of IMO, the organization said it was the best opportunity to coordinate and accelerate the R&D needed to meet the IMO’s 2050 emissions targets.

Responding to the action of MPC 75, the organizations followed up with a new statement saying that they, “recognize the unprecedented nature of its proposal and the associated complexities, and will work to address this so that governments can take forward its offer.”

Governments participating in the meetings contributed constructive input on the proposal the organizations said in a joint statement. “This included important questions about governance and IMO oversight, the need to take account of the economic impact on states of the proposed mandatory R&D contribution, and the need to address the interests of Least Developed Countries (LDCs) and Small Island Developing States (SIDS).”

The organizations reiterated their eagerness to work with governments to ensure the initiative is implemented saying they wanted the IMRB to be operational by 2023.