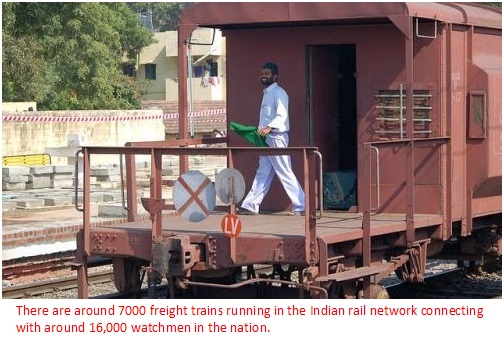 No more guard vans at the end of freight trains

Indian Railways is installing a new system to do away with the guard vans and the practice of deploying guards at the rear-end of goods trains to ensure all wagons remain intact when the train is in motion.

The innovation-driven activity visualizes the supplanting of gatekeeper vans with a completely stacked cart outfitted with an advanced gadget called the End of Train Telemetry (EoTT) framework.

The Rs 100 cr venture will provide a gadget that intends to build up a correspondence between the train driver and the last part of the train, to be prepared in all cargo trains.

While Railways would buy a complete 1000 such gadgets from abroad, the Diesel Locomotive Works, Varanasi, has requested 250 EoTT from South Africa.

There are around 7000 freight trains running in the Indian rail network connecting with around 16,000 watchmen in the nation.

The EoTT is relied upon to build up a correspondence between the loco driver and the last part of the train to guarantee that the cargo train is running with all carts as a total unit.