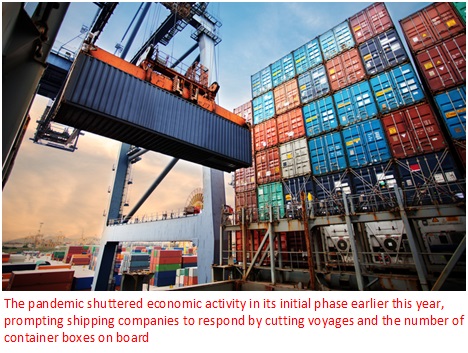 Shipping carriers seeking to capitalize on the most lucrative trade routes are returning empty cargo containers to Asia, contributing to freight rates that have soared to record highs.

Because the carriers aren’t first loading the boxes with exports before returning to Asia, the practice is pushing “demand for containers while simultaneously driving spot rates upward,” Josh Brazil, chief operations officer at data-analysis firm Ocean Insights, said in an email. Consumer demand is expected to remain elevated until the Lunar New Year holiday in February, he added.

Some 43.5% of containers at China’s Ningbo-Zhoushan port left on a different vessel than originally scheduled in October, up from 30.1% in September, according to data from Ocean Insights. The increase in the so-called rollover rate reflects a shortage of boxes and disruptions to the supply chain.

The pandemic shuttered economic activity in its initial phase earlier this year, prompting shipping companies to respond by cutting voyages and the number of container boxes on board. While subsequent waves of the virus continue to restrict air travel, a recovery in consumer activity in China and around the world has pushed freight rates along the lucrative Shanghai to Los Angeles route to a record high of more than $4,000 per 40-foot box, or about $1,200 more than Drewry’s global composite benchmark.

Currently ports in U.S. and U.K. congested to the point of becoming overwhelmed

“Currently ports in the U.S. and and the U.K. are becoming increasingly congested to the point of becoming overwhelmed, which is causing the global supply chain to become backed up even further,” Brazil said.