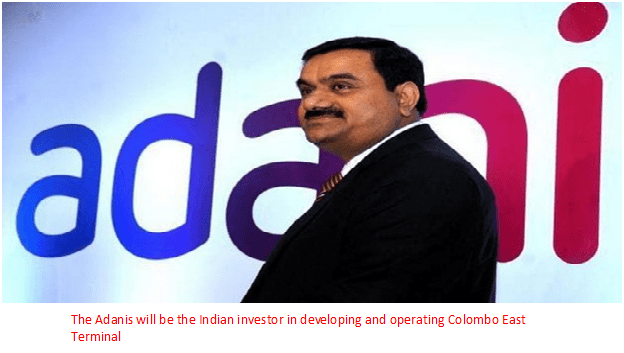 India's port major Adani group will be among those who are likely to operate the Colombo East terminal along with Japan and Sri Lanka Port authority. Japan will not be giving loans to the project as per the original proposal but will be one of the investors as per the new understanding according to Sri Lankan media reports

The Adanis will be the Indian investor. It is hoped that the Adanis will find the funds. Given the profitability of the East Container Terminal, getting the required funds will not be difficult, it is said. India's stakes in the project will be 15 per cent, the reports said.

Now that the Gotabaya Rajapaksa government has finally decided to get India, Japan and the Sri Lanka Ports Authority (SLPA) to jointly develop the Eastern Container Terminal (ECT) in Colombo port, the details are being worked out with the three stakeholders, diplomatic sources said.

As per the new understanding, Japan will not be giving a loan to carry out the project but will be one of the investors, along with India and Sri Lanka. This is in accordance with Lankan President Gotabaya Rajapaksa's policy of cutting down on debt and replacing debt with investment.

In May 2019 MoC by Sri Lanka, India, Japan to jointly develop and run the ECT

Earlier, in May 2019, a Memorandum of Cooperation (MoC) was signed by Sri Lanka, India, Japan to jointly develop and run the ECT. A Terminal Operations Company (TOC) was to be set up for conducting all operations. In the TOC, Sri Lanka would retain a 51 per cent stake, and the joint venture partners purchase a 49 per cent stake with India accounting for 15 per cent. A 40-year loan at an interest rate of 0.1 per cent was expected from Japan to fund the project. But this is now being reviewed and Japan will be an investor and not a creditor.

Colombo port in desperate need to get the ECT working

There is a huge scope for business as Colombo port is now highly congested and is in desperate need to get the ECT working. The partly finished terminal is working with just three cranes. As on date Colombo port has a backlog of 20,000 TEUs. It will take four to five days to clear this, said SLPA chairman Gen. (Rtd) Daya Ratnayake.