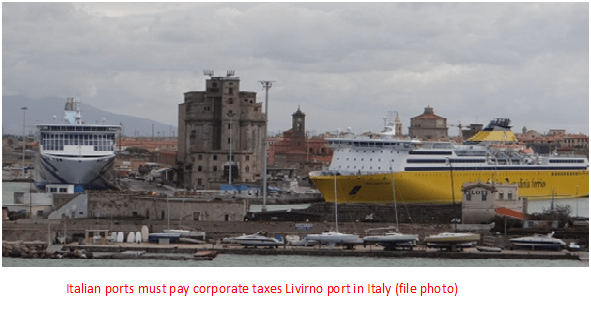 The European Commission ordered Italy to abolish the corporate tax exemptions granted to its ports. Profits earned by port authorities from economic activities must be taxed the antitrust regulators said under normal national corporate tax laws to avoid distortions of competition.

Today's decision resulted from inquiries the EC conducted into the taxation of ports across EU member states. The commissions said that these steps would align Italy’s tax regime with EU State aid rules. Currently, in Italy, port authorities are fully exempt from corporate income tax.

"EU competition rules recognize the relevance of ports for economic growth and regional development, allowing Member States to invest in them,” said Commissioner Margrethe Vestager, who is in charge of competition policy.  “At the same time, to preserve competition, the Commission needs to ensure that, if port authorities generate profits from economic activities, they are taxed in the same way as other companies. Today's decision for Italy – as previously for the Netherlands, Belgium and France – makes clear that unjustified corporate tax exemptions for ports distort the level playing field and fair competition. They must be removed."

In January 2019, the EC requested that Italy adapt its legislation in order to ensure that ports would pay corporate tax on profits from economic activities in the same way as other companies in Italy and in line with EU State aid rules. In November 2019, the Commission opened an in-depth investigation to assess whether or not its initial concerns regarding the compatibility of the tax exemptions for Italian ports with EU State aid rules were confirmed.

Italy now has to take the necessary steps that starting with January 1, 2022, all ports are subject to the same corporate taxation rules as other companies.

According to the EC regulators, Italy now has to take the necessary steps to remove the tax exemption in order so that starting with January 1, 2022, all ports are subject to the same corporate taxation rules as other companies. However, since the corporate tax exemption for ports existed prior to 1957 enactment of the treaties that formed the EC, it is considered existing aid, and as such Italy is not required to recover the corporate tax that was not paid in the past.

The ruling regarding Italy’s ports follows similar actions by the EU with other member states. In 2019, Spain agreed to amend its corporate income tax legislation to bring it in line with EU aid rules. Normal corporate income tax rules were applied to Spanish ports starting in 2020.

The European Commission said that it will continue to assess the functioning and taxation of ports to ensure fair competition in the EU port sector.