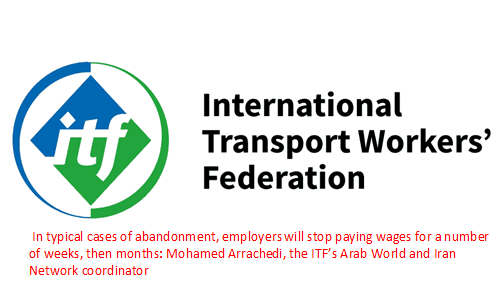 Member unions of the International Transport Workers’ Federation (ITF) have helped recover more than $1.7 million in wages owed to seafarers amid a concerning rise in abandonment cases by shipowners.

Cases of abandonment and unpaid wages are definitely on the rise across the world, and in this region in particular. We’re also seeing more employers withholding the wages they owe to seafarers – and seafarers are paying the price,” Mohamed Arrachedi, the ITF’s Arab World and Iran Network coordinator, said.

Arrachedi said that, in typical cases of abandonment, employers will stop paying wages for a number of weeks, then months.

.As explained, many seafarers are often concerned about the consequences of arguing with their employer over matters like pay as they fear they might be blacklisted and won’t be able to get another contract.

The second reason for the hesitancy to speak out is that shipowners are seafarers’ tickets home. Under the Maritime Labour Convention, an employer pays for the cost of getting seafarers to and from ships. Seafarers worry that an angered shipowner could defer or deny them repatriation as punishment for raising concern over unpaid wages.

What is more, repatriation during COVID-19 relies heavily on the determination of the employers to navigate obstructive bureaucracy and put seafarers on record-high priced flights.

For many seafarers tired after 12, 14 or 18 months at sea and desperate to get home, making an enemy of their employer is a risk they are not willing to take.

The 17-member crew of the Moldovan-flagged cargo carrier MV Mako dared to speak up after they went a full nine months without getting paid.

After being paid three months of wages from when he joined the ship in Algeria, an Egyptian seafarer stopped receiving payments from his employer.

Mako contacted ITF for assistance when wages and repatriation denied

By the time the Mako was docked in the Port of Aden, Yemen, in August 2020, he had been on board for twelve months, nine of them unpaid.

He demanded to leave the ship, be paid his outstanding wages, and be repatriated home. He contacted the ITF for assistance.

Under ITF pressure, the company agreed to arrange and pay for the seafarer’s flight home. The ITF ensured he was paid his $5,292 in withheld wages, as well as a refund for the travel expenses he incurred joining the ship.

“We can bring the impunity of some bad shipowners to an end. The first step is for seafarer to contact the ITF,” he concluded.