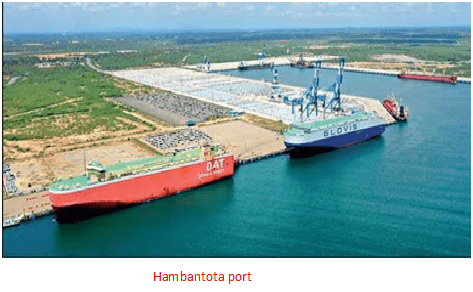 In an effort to give an impression that Sri Lanka is a neutral country and not aligned with China, a Senior member of the Rajapaksha government said they are reviewing the lease agreement with the Chinese company for operating the Hambantotal International port, situated in the southern tip of the island nation.

Sri LankanMinister Namal Rajapaksha told the country's parliament that the present regime is engaged in a dialogue with China to amend the agreeemeng on Hambantota International Port, according to Sri Lankan media reports.

Minister Rajapaksa said this in response to SJB MP Kabir Hashim’s statement that the present government is continuing the agreement which the previous government got into with China to run the Hambantota Port.

“We are currently engaged in a dialogue with China to amend the Hambantota Port agreement and are engaged in amending all trade agreements which the previous regime got into,” the Minister said.

Minister Rajapaksa then questioned MP Hashim as to what had become of the large amount of funds which the previous regime received as a result of signing the agreement on the Hambantota Port.

Mr. Hashim said these funds were used to settle the borrowings made to construct the Hambantota Port and the Airport.