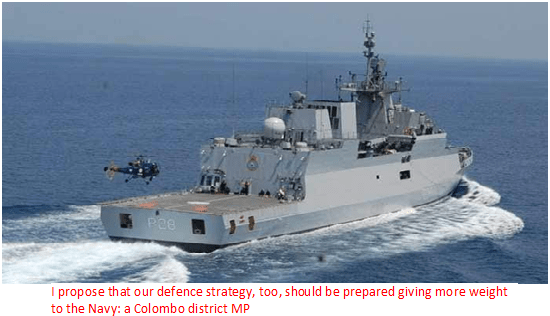 Sri Lanka’s Defence strategy should have its Focus on developing the Navy, Colombo parliamentarian demands in Sri Lankan Parliament

The United Nations is going to announce the extent of the Exclusive Economic Zone belonging to Sri Lanka soon and hence the island nation's defense strategy should be to give more teeth to its naval forces, a senior parliamentarian from Colombo said while participating in the discussions on budget, according to Sri Lankan Media reports.

Participating in the third reading debate on Budget 2021 under the expenditure heads of ministries of Defence and Public Security, a Colombo district MP. Patali Champika Ranawaka said that countries with a bigger landmass prepared their defence strategies focused on ground forces, while smaller countries such as Britain and the Netherlands concentrated more on their naval power.

Our defence strategy, too, should be prepared giving more weight to the Navy

“Sri Lanka with a sea area 23 times larger than its landmass too should think on the same lines. The United Nations is going to announce the exclusive sea zone belonging to Sri Lanka in the future. Therefore, I propose that our defence strategy, too, should be prepared giving more weight to the Navy.

“We must not forget how the LTTE could make use of our foreign policy that was changed under the JR Jayewardene government to become a pro-American country during the times when Russia and the US were in a power struggle. Again a similar situation is cropping up.

We recently saw the QUAD security arrangement. A new strategic alliance by the name of Quadrilateral Security Dialogue was formed by the United States,  Japan,  Australia  and India. This is against the Chinese influence in the Indian Ocean. It has been dubbed the Asian NATO.

If we are going to take sides in this struggle of a new cold war our security and economy will be in danger. We should therefore maintain a non-aligned policy. I think that all our governments should follow Prime Minister Sirimavo Bandaranaike government’s policy of keeping Indian Ocean a peace zone.

At the time of the end of the war, our Navy gained international attention by maintaining a reliable sea supply route. It maintained those supplies amidst Sea Tiger attacks. TODAY the Somalia pirate problem is not that strong but our naval force still could become the strongest Navy in providing security services in this region.

Today, technology plays a pivotal role in defence affairs the world over

“Today, technology plays a pivotal role in defence affairs the world over. Recently, the leading nuclear expert of Iran was assassinated. Prior to that Qasem Soleimani, leader of Iranian Quds Force was assassinated. Both assassinations were not carried out by persons but automatic electronic devices.

The Srilankan defence forces must get ready to be aware of digital technology and latest innovations of cyber warfare. But in our country if our authorities get hold of such technology, it would be used to hunt opposition politicians and to listen to their telephone conversations,.”

Ranawaka said that the head of State and Chief Executive holding the defence portfolio was better for the national interest.