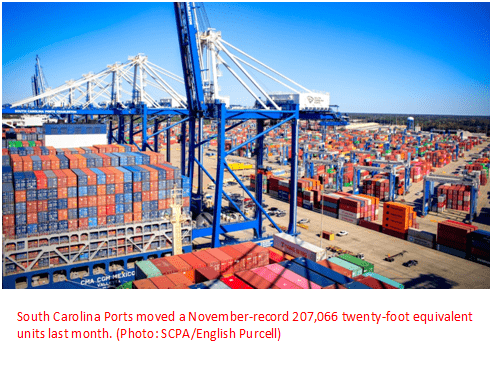 The South Carolina Ports Authority said the record-setting 207,066 twenty-foot equivalent units (TEUs) it moved in November stand as evidence that global trade continues to rebound from coronavirus-forced shutdowns earlier in the year.

That November-best figure also represents a 12% year-over-year increase from the 184,928 TEUs handled at the Wando Welch and North Charleston container terminals in 2019.

“SC Ports had a truly remarkable month with a record November for containers handled as well as impressive results in our vehicles and inland ports segments,” President and CEO Jim Newsome said in a statement issued Monday.

We look forward to opening the Hugh K. Leatherman Terminal in March

“SC Ports is well-positioned to handle increasing cargo volumes brought on by both the ongoing recovery and the booming Southeast market,” Newsome said. “Our strategic infrastructure investments are coming online at the right time. We look forward to opening the Hugh K. Leatherman Terminal in March.”

The SCPA has said the $1 billion first phase of the Leatherman Terminal development complements efforts to modernize the Wando Welch Terminal and deepen Charleston Harbor to 52 feet, and that the investments will enable it to handle four 14,000-TEU vessels simultaneously in 2021 as well as a 19,000-TEU vessel.

Newsome also noted Walmart’s groundbreaking last week for its 3 million-square-foot import distribution center in Ridgeville, South Carolina, which is expected to boost port volumes by 5% annually once it is operational..

“SC Ports’ proven track record of handling high-demand supply chain needs for the automotive industry gives us full confidence in their ability to meet our retail distribution and e-commerce needs. We are excited about the impact this new distribution facility will have on the regional economy and how it will help us better serve customers across the Southeast,” Smith said.

Newsome vowed SC Ports “will support the investment by efficiently handling Walmart’s imported goods. Walmart is at the cutting edge of supply chain sophistication and performance, and their confidence in us speaks volumes. This investment is a signal to the major retailers that we’re prepared to be a force in retail distribution and that we can handle their requirements.”

SC Ports purchased the 1,000-acre Ridgeville Industrial Campus in 2018 with the goal of creating a site for port-dependent businesses to locate. The U.S. Department of Transportation awarded SC Ports a nearly $22 million grant to build infrastructure at the site for current and future tenants. Walmart is the site’s first tenant