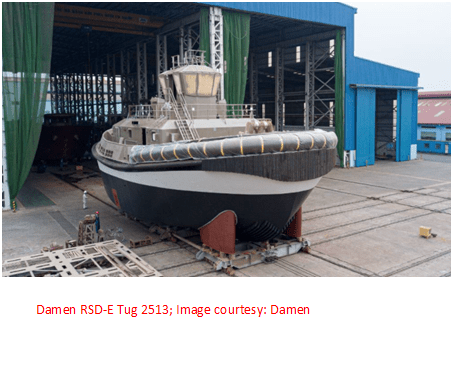 The shipbuilder was tasked with making the already efficient design of RSD-E Tug 2513 more sustainable by making it fully-electric.

The idea proved not only to be possible but economically viable, Damen said.

We are looking forward to completing the vessel in the coming months.

“Since receiving the order for this historic vessel, we have been working towards this moment – the introduction of the first fully-electric tug of this capability to the water. We are looking forward to continuing in our task and completing the vessel in the coming months.”

The next stages of construction will see Damen install the vessel’s innovative hardware. The RSD-E Tug 2513 is scheduled to be delivered to Ports of Auckland end of 2021.

With electric motors powering the dredge system, the ECSD 650 makes possible zero-emissions dredging projects. The ECSD is a modular dredger, dismountable for transportation and easy assembly in the remotest of locations.

Recently, Damen signed a contract for the delivery of nine hybrid and fully electric ferries to operate in the area of Rotterdam in the Netherlands.