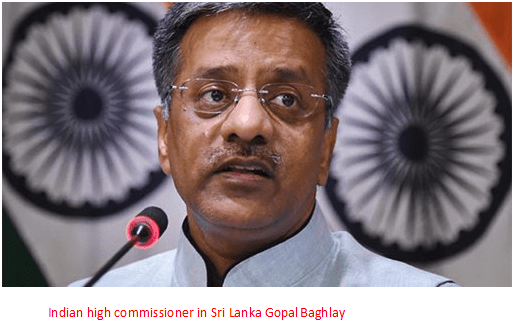 Describing the proposed investment by India and Japan in Colombo East terminal as a win-win opportunity, Indian high commissioner in Sri Lanka Gopal Baghlay said India would be happy to see an early implementation of this project.

Sri Lanka’s strategic position could be fully tapped in conjunction with the huge Indian market. Through this project the island nation can achieve its goal of becoming connectivity and energy hub of the region, the high commissioner said in a detailed interview to a Colombo based newspaper.

How serious is India about this project?

The development of the East Container Terminal (ECT) is mooted once again as a project to be undertaken through an equity sharing arrangement. How serious is India about this project?

As you know a trilateral Memorandum of Cooperation was concluded in 2019 among India, Japan and Sri Lanka regarding the development and operation of the ECT.

Experts, including in Sri Lanka, have pointed out that having India as a partner in the project would benefit the Colombo Port and Sri Lanka since over 60% of Colombo Port’s trans-shipment business is with India. India’s participation in the ECT will also ensure continuity to the strong shipping ties between India and Sri Lanka when deep ports come up on Indian coasts, which are not far away.

The trilateral ECT project will also attract foreign investment to Sri Lanka, as per Sri Lanka’s priority of ‘investments not loans’. That will create jobs for the people of Sri Lanka, address capacity saturation at the Colombo Port and cement Sri Lanka’s attractiveness as a shipping hub.

So the investment by India and Japan in the ECT in Sri Lanka is a win-win-win opportunity. Therefore, India would be happy to see an early implementation of this project.

Q Do you see any geopolitical significance in that project for India?

I understand that one of the objectives of the Government of Sri Lanka is to strengthen Sri Lanka’s position as a connectivity hub and develop it as an energy hub. I believe the full benefit of Sri Lanka’s advantageous geographical position in the proximity of busy global shipping lines can be derived in conjunction with the huge market, expanding economy and technological advancement of next-door neighbour India.

Q Have you received any green light from the Sri Lankan Government to move ahead with the project?

The three countries are in touch through diplomatic channels.