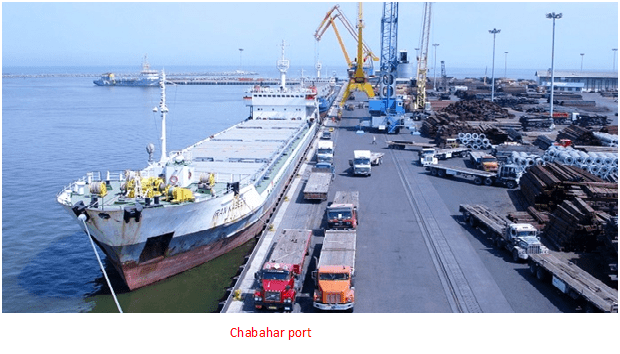 India, Iran and Uzbekistan will hold a trilateral dialogue on december 14th on joint use of the strategically located Chabahar port which is being increasingly seen as a fulcrum of connectivity to Central Asia. The announcement of the meeting was made by the Ministry of External Affairs (MEA).

"The first trilateral working group meeting between India, Iran and Uzbekistan on joint use of Chabahar Port will be held virtually on December 14," the MEA said.The port is being developed by India, Iran and Afghanistan to boost trade ties among the three countries in the wake of Pakistan denying transit access to New Delhi.

Iran has just completed the laying of railway line to Afghanistan border. This has come as a boon to the Chabahar port whose volumes are expected to increase. India is operating two terminals at the port. With the prospects of opening trade with Uzbekistan, volumes at the indian terminals are bound to increase futher.

The trilateral meeting should be seen in the context of a possible flexible US political line against Iran with the change of guard at the white house. The Nuclear deal which former President Obama signed which was rescinded by President Trump is likely to be revived.

Located in the Sistan-Balochistan province on the energy-rich Iran's southern coast, the port can be easily accessed from India's western coast, bypassing Pakistan. It is considered to be a major transit point to connect with several Central Asian countries.The trilateral meeting is taking place in the backdrop of India pitching for participation of Uzbekistan in the International North South Transport Corridor (INSTC) project.

India welcomes the interest of Uzbekistan to use the Chabahar port

"India welcomes the interest of Uzbekistan to use the Chabahar port as a transit port. This would open up economic opportunities for the traders and business community of the region," the MEA said in a statement."Besides Uzbekistan, other Central Asian countries have also shown interest in using the port. India seeks to cooperate closely with regional countries on this issue," it said.

Monday's meeting would be jointly chaired at the deputy minister level by Uzbekistan and Iran while the Indian delegation would be headed by a secretary-level officer.