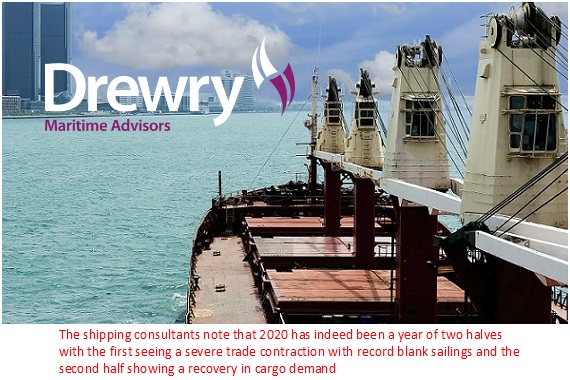 In a new opinion piece Drewry shipping consultancy notes that the container equipment shortage being faced by the supply chain is due to logistics and not fleet underinvestment.

According to Drewry’s Container Equipment Forecaster, the global ocean-borne container equipment fleet is expected to end the year having declined 1.1% to 39.9 million TEU, compared to a 3.3% projected fall in 2020 global container port handling. This suggests that the former has more than kept pace with the latter, Drewry said.

The shipping consultants note that 2020 has indeed been a year of two halves with the first seeing a severe trade contraction with record blank sailings and the second half showing a recovery in cargo demand.

Despite the renewed demands the ratio of port throughput per shipping container only reached 20 in 2H20, which Drewry notes is not particularly high. With the ratio typically reaching above 20 in most years from 2017 onwards.

However, Drewry notes that the surge in cargo demand has boosted investment in new container equipment. With this renewed demand manufacturing has recovered and is expected to reach 2.67 million TEU by the end of 2020.

Output in 2021 is forecast to leap as much as 40% with further growth expected in subsequent years.

Drewry concludes, the ramp up of newbuild production will certainly help alleviate some of the ongoing container equipment shortages, but the greatest impact will come from a normalisation of cargo demand development and carrier sailing schedules, as Covid-19 related disruption unwinds through the first half of 2021.