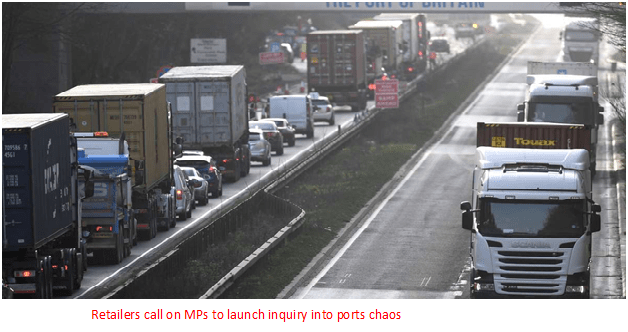 Britain’s retailers and food manufacturers have called on lawmakers to urgently investigate ongoing disruption at UK ports, warning that delays were hurting their plans to build stocks ahead of Christmas and the Dec. 31 end of the Brexit transition period.

The British Retail Consortium (BRC) and the Food and Drink Federation (FDF) said on Thursday they had written to Lilian Greenwood, chair of parliament’s Commons Transport Select Committee, and Angus Brendan MacNeil, chair of the International Trade Committee, requesting an urgent inquiry into ongoing disruption at ports and across the shipping market.

The BRC and FDF said the impact of the coronavirus pandemic on global shipping schedules and the shipping workforce, along with a shortage of empty containers, had created significant disruption at many of the UK’s key ports, such as Felixstowe and Southampton, in the crucial run-up to Christmas.

“This has meant retailers face major challenges in building up stock for the Christmas period and for the end of the (Brexit) transition period at the end of December,” they said.

They said the disruption was also having a major impact on shipping-related costs.

“Container spot rates have jumped considerably – in one instance, by 170% from this time last year. Others have noted week-on-week cost rises of 25%. In addition, congestion charges are being levied by carriers for imports into Felixstowe and Southampton,” they said.

“After a tremendously challenging 2020, many firms’ cashflows are under severe pressure, and so businesses are in no position to absorb these additional shipping costs,” said BRC Chief Executive Helen Dickinson.

“As a result, consumers will pay the final price. Christmas orders could be delayed, and retailers might be left with no option but to increase product prices.”

Last week, the BRC warned that shoppers face higher food prices from next year if new tariffs are imposed in the absence of a trade agreement with the EU.