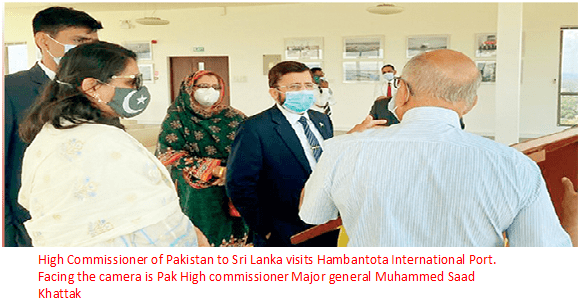 They were welcomed by Ray Ren, CEO of Hambantota International Port Group (HIPG). The Chief Operating officer of the Hambantotal port briefed the Pakistani officials on various aspects of the port operations and developments in the port.

The visit by the Pakistani officials assumes significance since the port is owned by a Chinese company and the concerned official was a senior officer of the Pakistani army till a few years ago.

The close relatations between Sri Lanka and Pakistan is over fifty years old when Pakistani military aircrafts on their mission to save their rule in East bengal (now Bangladesh) was given refuelling facilities at Colombo airport. Pakistani military planes had to take a circuitous route along the Indian coast to reach Dhaka as India denied permission to overfly through its territory.