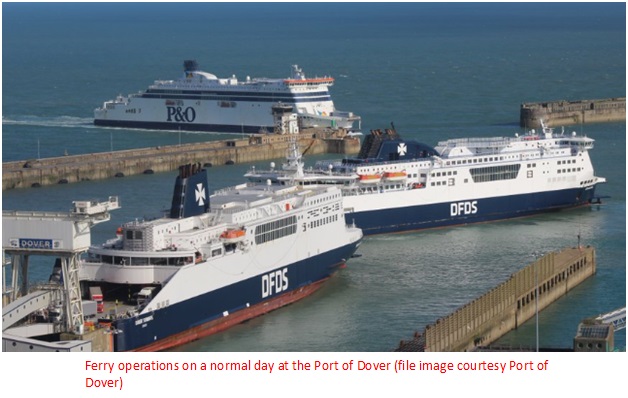 France has temporarily closed its ports to ro/ro ferry traffic from the UK, one of dozens of measures taken by national governments to prevent the spread of a mutated variant of COVID-19 that has emerged in southern England. Based upon modeling, British scientists believe that the variant may be as much as 70 percent more infectious than the base version of the virus.

The cross-channel ferry closure has stranded thousands of trucks and cargo shipments outside of Britain's key ro/ro terminal, the Port of Dover. During the holiday season in any other year, about 10,000 trucks would normally pass through the port each day on their way between the UK and France.

On Monday, thousands of trucks were stacking up on the M20 motorway outside of Dover as local police work to manage a flood of stalled freight. The UK Department for Transport (DfT) is preparing space at a nearby airport in Kent, where it expects to accept up to 4,000 trucks for temporary storage.

"Accompanied freight and passenger customers are asked not to travel to the port," the Port of Dover said in an alert Sunday. "Unaccompanied [freight] traffic continues to be allowed into France . . . All traffic into the UK is currently unaffected by those restrictions (subject to pre-existing travel constraints for tourists)."

The shutdown is limited to 48 hours, but this could be enough to affect perishables, according to hauliers.

At the Port of Portsmouth, operations running smoothly by disconnecting the freight trailer from the semi truck

The Port of Newhaven, which hosts one ferry connection to Dieppe, reported Monday that it has not experienced freight traffic congestion despite the shutdown for outbound truck movement. At the Port of Portsmouth, port officials said that they were keeping operations running smoothly by disconnecting the freight trailer from the semi truck, sending the cargo on its way across the Channel without the driver. "We have the ability to put the trailer onboard without the cab, which is something they cannot do in Dover," Portsmouth City Council leader Gerald Vernon-Jackson told local media. "So we are continuing to send lorries across to France, when Dover cannot."