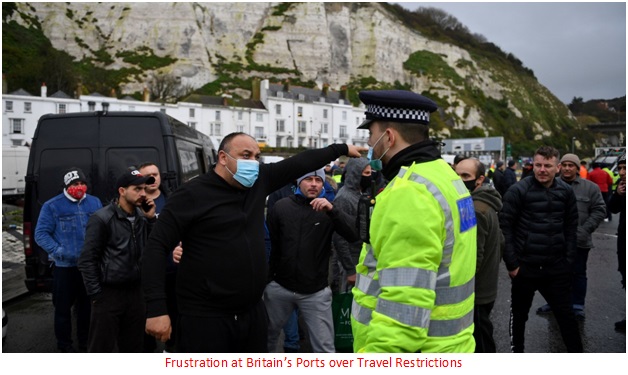 The logjam of thousands of Europe-bound trucks stuck in southeast England will take days to clear because drivers must show a negative coronavirus test before they can cross the channel.

The British army was mobilized to help the National Health Service, the country’s health care system, set up facilities to offer rapid coronavirus tests to drivers, who have been stuck in Britain since Sunday night, when France blocked passage to prevent the spread of a variation of the coronavirus that has swept through parts of England.

Results though available in 30 minutes were considered unreliable

Results from the test are usually available within 30 minutes, although the test is considered unreliable by some health professionals.

Trucks are parked around the ports, on closed sections of the motorway and at Manston Airport, a closed airfield nearby that has been turned into a giant parking lot for trucks.

Drivers were reportedly told they needed to go to the airport to take the tests. Frustrations have been building and skirmishes have broken out among drivers, other waiting passengers and the police.

Authorities cautioned that it could take days to clear out the more than 5,000 Europe-bound trucks jammed into the area.

If a driver tests positive after PCR test, he would be offered hotel accommodations to self-isolate for 10 days

“I think it will take a few days to work our way through,” Robert Jenrick, (not Robert Jenkins, as was reported earlier here) a government minister, said on Sky News on Wednesday morning. Any drivers who received a positive test result, he said, would be offered a more accurate test, called a PCR test, which takes longer to process. If that was also positive they would be offered hotel accommodations to self-isolate for 10 days.

Rod McKenzie, the director of policy at Road Haulage Association, which represents the British road transport industry, said there were probably 8,000 to 10,000 trucks in Britain waiting to cross the border.

Trucks in Europe carrying goods to Britain were still allowed to pass this week, but their numbers had declined amid fears that the drivers would be marooned once they crossed into Britain.

The crisis at the border has raised concerns about food supplies around the Christmas holidays, because Britain relies on importing fresh fruit and vegetables, especially in the winter.