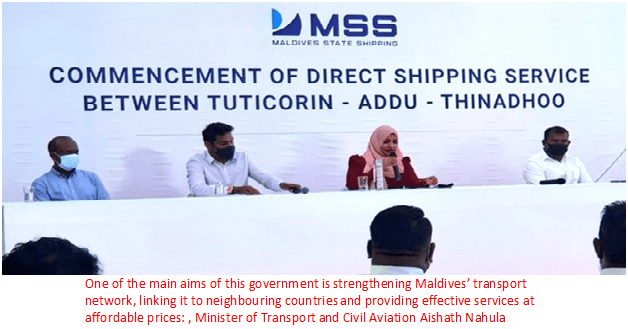 The ‘MV Bonthi II’ vessel operated by MSS docked in Thinadhoo with 400 tonnes of cargo as part of its return to Maldives.

The ship departed to India on November 24.

Speaking at the ceremony held to commemorate the occasion, Minister of Transport and Civil Aviation Aishath Nahula stated that the beginning of the service demonstrated the government’s efforts to boost commercial activity in Maldives’ south.

The minister also noted that cargo services would facilitate convenient and affordable access to goods for citizens residing in the region.

“One of the main aims of this government is strengthening Maldives’ transport network, linking it to neighbouring countries and providing effective services at affordable prices”, she added.

Noting that only 400 tonnes of cargo were transported during the first voyage, MMS Managing Director Abdulla Saeed stated that future trips would utilise the maximum capacity of the vessel.

In addition to highlighting the benefits for businessmen in the south, MMS Managing Director noted that the commencement cargo services would create job opportunities for citizens living in the region.

He expressed hope that sea farers and other interested professionals would work with MSS.

While MSS has started direct shipping to Thinadhoo, the state also contracted Maldives Transport and Contracting Company (MTCC) on Tuesday to develop a regional harbour on the island.