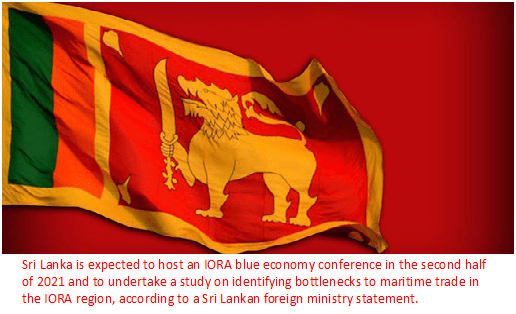 Sri Lanka has been endorsed as the vice chair of the Indian Ocean Rim Association (IORA) Council of Ministers from 2021 to 2023 and will take over the chairmanship from 2023 to 2025, the Foreign Ministry of China said in a statement on December 25th.

The approval of the Sri Lankan application for the position was made at the virtual 20th Council of Ministers meeting hosted by the United Arab Emirates.

Sri Lanka strongly believed that only a safe, secure and peaceful Indian Ocean could bring about economic prosperity .During the meeting, Foreign Minister Dinesh Gunawardena said during the meeting while reaffirming Sri Lanka's commitment to making the Indian Ocean region a zone of peace. Gunawardena also called for collaborative efforts from all IORA members and dialogue partners.

"Since 2018, Sri Lanka as the Coordinator of the IORA Working Group on Maritime Safety and Security has dedicated its efforts to ensuring that there is greater connectivity via knowledge and experience-sharing through the Work Plan adopted at the Working Group Meeting held in Colombo in August 2019," he said.

Sri Lanka is expected to host an IORA blue economy conference in the second half of 2021 and to undertake a study on identifying bottlenecks to maritime trade in the IORA region, according to a Sri Lankan foreign ministry statement.