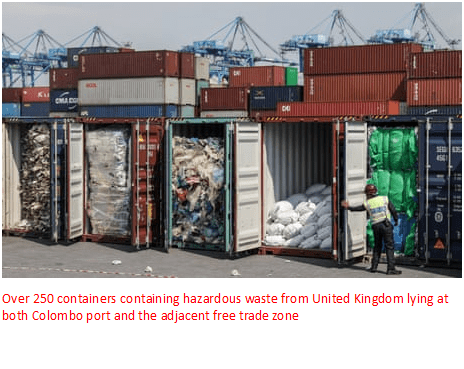 Hazardous waste from UK remains in Colombo port for nearly three years; now from Ukraine; environmentalists up in arms

Over 250 containers containing hazardous waste  from United Kingdom is lying at both Colombo port and the adjacent free trade zone in blatant violation of internatinal law outside. They had arrived in Colobmo port between 2017 and 2018 and the legal tussle is holding up action against them.

The Sri Lanka Customs and the Central Environmental Authority (CEA) have failed to take legal action against the companies responsible for importing 263 containers full of hazardous waste to Colombo port from the United Kingdom.

With more foreign garbage entering the country, this time from Ukraine, environmentalists and authorities are up in arms.

Alarmed at the rate of arrival in Colombo port from various European countries, the Sri Lankan  Attorney General’s Department would soon submit a report to Parliament, spelling out the fact that both the central environment authority and Customs Department had failed to file legal action against the importers of waste.

Environment Minister Mahinda Amaraweera, was quoted by the Sri Lankan media that he would take immediate action. He also said that such activities should be completely stopped and he would do his utmost to rid the country of foreign waste.

Customs Director Sunil Jayarathna told The Island that a new probe team would be appointed and the CID called in. The delay in sending back the consignment to the countries of origin was due to a Court order and a Customs inquiry. He said the Customs had not been able to do much for months due to the pandemic and most of the officials were quarantined.

Some containers of hazardous waste were finally sent back to the United Kingdom three months ago after more than a year.

Hazardous waste transfers were against the Basel Convention said Jayaratne

Jayaratne said that the Customs had decided on the penalties. Environmentalists said Rs. 1.6 billion had to be charged from the local agent and a separate penalty imposed on the British company concerned. Jayaratne said that hazardous waste transfers were against the Basel Convention.

The Customs said that they wanted to send the containers last year back to the UK and awaited the verdict of the Court of Appeal. Colombo Metal Industries and ITL Colombo Limited imported the hazardous waste. The containers contained used mattresses, carpets and hospital waste, officials said.