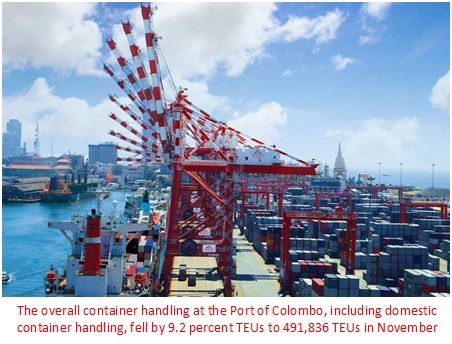 The transshipment container volumes at the Port of Colombo slumped in November as the port’s operation faced disruptions due to the second wave of COVID-19 in the country, leading to congestion at the container terminals.

Accordingly, the container transshipment volumes declined by 7.4 percent YoY to 394,737 TEUs in November, after recovering to pre-pandemic levels in July, the Central Bank (CB) data showed.

The container throughput at the port’s deep-water terminal, Colombo International Container Terminals (CICT), declined by 11.5 percent YoY to 206,000 TEUs in the month. Consequently, the overall container handling at the Port of Colombo, including domestic container handling, fell by 9.2 percent TEUs to 491,836 TEUs in November.

The overall container handling at the port stood at 6.29 million TEUs during the 11-month period, recording a decline of 4.5 percent YoY.

The container throughput at Port of Colombo to come close to 7 million TEUs  down from 7.2 million TEUs in 2019.

CICT was the largest contributor by handling 2.625 million TEUs despite recording a decline of 0.1 percent YoY in the period. SLPA officials project the container throughput at Port of Colombo to come close to 7 million TEUs at end of this year, down from 7.2 million TEUs in 2019.