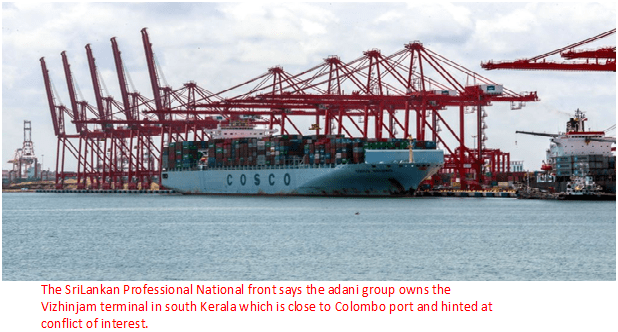 The SriLankan Professional National front has come out with a new theory to oppose handing over the Colombo port's east terminal to the Adani group.

The front says the adani group owns the Vizhinjam terminal in south Kerala which is close to Colombo port and hinted at conflict of interest.

The port of Colombo is a major transhipment terminal with the bulk of the traffic linked to Indian demand. India pursuing its national interest has developed Vizhinjam International Deepwater Multipurpose Seaport to act as competition to the port of Colombo. .

The PNF expressed these sentiments on December 30, 2020 at the Organisation of Professional Associations to which it is affiliated.

The PNF strongly believes that the ECT and SAGT terminals would allow the Ports Authority to play a leading role in South Asian transhipment. The Port of Colombo is operational throughout the year and for all 24 hours of the day. The Port is also one of the few in the region capable of accepting deepwater vessels.

Due to international shipping regulation, relative costs, and geolocation transhipment into the region is most suitably unloaded in Colombo at the ECT. The unloaded cargo at the ECT can easily be transported to the SAGT terminal where it will be loaded onto smaller feeder vessels and transported into smaller ports in the region.

The PNF alleges that the joint venture with an international port operator is not required. They note that funds exist within the Ports Authority budget to develop the ECT and that funds are currently being used on projects with a lower rate of return.

The part divestment of the East Container Terminal (ECT) is expected to limit the capacity of the state to reap the benefits of the ending of the leasehold on the adjacent South Asia Gateway Terminals (SAGT).

The  Front opposes any attempt by the state to divest national assets to private and foreign parties.The PNF allege that it is not the government but strong vested interests that are looking to divest the port. They call on all actors to stop the divestment of national assets.

The new extension with deep water container terminal capacity of the port of Colombo was initiated by former Prime Minister Ranil Wickremesinghe. Wickremesinghe obtained US$ 450 million financing from the Asian Development Bank in a manner that prevented full state ownership of every terminal.